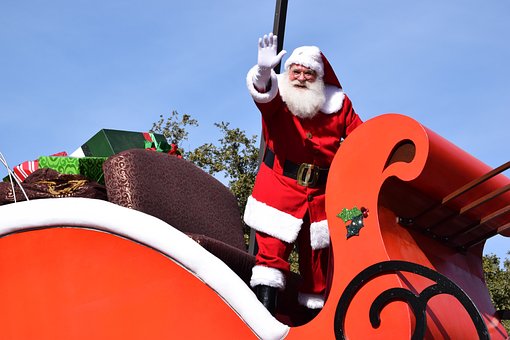 Now that Thanksgiving is over, it is time to welcome the Christmas season with it's Black Friday sales, Cyber Monday Sales, and certain Christmas parades.  This past Wednesday, I provided a bit of information on one of the longest running Christmas parades but there are other that have been running almost as long as Macy's.

One of those is the Hollywood Christmas Parade.  Back in 1928 when Hollywood was a separate city from Los Angeles, the head of the Hollywood Chamber of Commerce wanted to bring attention to his town by creating his own parade.

It was done a bit differently in Hollywood by turning the shopping district into Santa Claus Lane complete with a parade passing down this lane.  It included Santa Claus accompanied by a beautiful actress from Universal on a sled drawn by reindeer and followed by a few floats.  This parade ran every night until Christmas and each night Santa had a different actress on the sled.  By 1931, this parade became an annual event with stars who provided publicity for themselves, their movies, and studios along.  The parade continued to grow to include bands, drill teams, horse back riders, and more floats.  Gene Autry said that his appearance in the 1946 parade inspired him to write the now famous song "Here Comes Santa Claus."

Hollywood chose to suspend the parade from 1942 to 1944 due to World War II but when it resumed in 1945, people attended in record breaking numbers.  This parade also appeared in a 1951 as it was recorded live in front of Grauman's Chinese Theater.  At about the same time, the city began putting up electrified trees along the route but when the fire Marshall declared them a hazard, they disappeared.  In 1978, the parade moved to the Sunday after Thanksgiving and was renamed The Hollywood Christmas Parade.  Unfortunately, they quit broadcasting the parade in the early 2000's due to the cost of broadcasting the parade and in 2007, the Chamber of Commerce cancelled the parade but due to the number of protests, it was brought back in 2009.

Another famous Santa Claus parade happens in Toronto, Canada.  In 1905, Eaton's Department store arraigned for Santa Claus to arrive at Union Station so he could tour Toronto before Christmas.  The very first year, there was only Santa but it was enough to make children line the streets in order to see him.   The next year, they added a footman and trumpeters to announce Santa.  For the two years between 1910 and 1912, Santa's trip took two days because he began the trip in downtown New Market before over nighting in York Mills, and ending up on Yonge Street Saturday afternoon.

In 1913, Santa made the tour while riding on a sleigh pulled by reindeer who'd been specially brought in for this event.  Over time, the parade continued growing with floats, bands, etc.  The parade continued during World War II with the parade organizers creating elaborate costumes out of paper and whatever they could.  They began broadcasting the parade in 1952 and the parade continued until 1982 when Eaton's had to withdraw their sponsorship.  Rather than let it die, 20 companies banded together to provide new sponsorship so tradition could continue.  This parade usually happens a bit before Thanksgiving in mid November.

Now, it is so much easier to find a parade beginning on Thanksgiving and running till Christmas.  Some have parades of lights, while others have the traditional floats, bands, and marchers but it is the season.  Let me know what you think, I'd love to hear. Have a great day.