I don't know if you remember the Wide World of Sports show?  I vaguely remember my father having it on most Saturdays so he could catch up on sports. When winter came, I loved watching the opening because there was this guy who tumbled down a ski jump and crashed into the snow several yards away at the bottom.  This particular clip always accompanied by a narrator saying "And the agony of defeat."

Every single time I saw it, I cringed even though I knew what would happen.  I think I even squeezed my eyes shut when he started tumbling because I felt so sorry for him.  It was years later, I found out the guy survived and wasn't really hurt at all except for his pride.

I remember liking winter sports better than the summer ones except for synchronized swimming. It seemed winter sports tended to be so much more graceful, except for hockey, and every one seemed so coordinated which is something I never was.

I did love watching the ice dancers and all ice skaters because they made it look so easy.  I can tell you from personal experience, it is not that easy.I tried ice skating in Tucson Arizona and actually learned to stand up without falling over or landing flat on my butt too often.  I managed to keep my ankles from buckling by lacing my ice skates as tight as I could. I wasn't even good enough to pretend I was a skating star!

I also loved watching down hill skiing.  Again, these professionals made it look so easy.  I tried plain downhill skiing and even signed up for a lesson.  First of all it was intimidating seeing these little kids whizzing down the expert trails.  Then I got the teacher who laughed when I asked how you stop if you start going down hill backwards.  He insisted that it was impossible to go downhill backwards.

Well, he was wrong!  I managed it on the bunny slope but I still did it.  I moved up to grab the tow rope and I found the only small bump in the area and started going down hill backwards until my butt made contact with a tree.  Talk about bruised ego's and butts.  After that I swore, I would never try skiing again.

Over the years, I come to the conclusion that I don't have to actually participate in the sport to enjoy its finer points.  I still enjoy watching ice skating and skiing on television but I've also added watching those extreme guys on the snow boards.  That is cool.

Posted by Lee MacArthur at 11:08 AM No comments:

Strike Up The Band!

Everyone loves listening to a band!  Remember sitting out on the grass in a park while listening to the live music of the town band.  Remember standing at the side of the street watching the parade with all the bands?

When I visit Hawaii, I always check to see if the Royal Hawaiian Band is playing anywhere other than the bandstand and Iolani Palace. The band is unique in that they've been around since 1836.  Can you imagine that? In the beginning, they were known as the King's Band because they were founded by King Kamehameha III and they accompanied him on his trips to the other islands.

Image, a band that has been making music for over 175 years.  They are unique in that they they are funded by the city and county of Honolulu and are the only full time municipal band in the country.

They have their own bandstand in Kapiolani Park yet they play in parades, over at Ala Moana Shopping Center, at Iolani Palace or where ever needed.  They perform over 300 concerts a year.
Of course, their specialty is Hawaiian music and local pieces are sprinkled among regular pieces normally played at a band concert.

I have family members who saw the band play back in 1938 when most people traveled to and from Hawaii by ship.  The conductor mentioned that the band would play at the dock for boats arriving and departing because one of the pieces played celebrated of that.  In addition, that night there were two ladies who both sang and danced.

Once the concert was over, it was possible to meet and talk to the singers and musicians.  It was awesome.   Their bandstand was recently renovated so during that time, they couldn't play in the park.  If you look carefully, you can see there is a beautiful pond on the backside of the bandstand.  Last time I went through, there were lots of birds swimming and enjoying themselves in the pond.

If you are ever over in Honolulu, check their website to see where they are due to play, hop a bus, and go listen.  They are awesome and unique.  Even their band uniforms are traditional Hawaiian.

Posted by Lee MacArthur at 11:57 AM No comments:

Email ThisBlogThis!Share to TwitterShare to FacebookShare to Pinterest
Labels: The Royal Hawaiian Band.

They say names carry power but have you ever wondered how people got their last names?  Many people have a last name based on their ancestor's job such as Smith, Cooper, or Miller.  Smith due to the family being blacksmiths or Cooper because of making barrels, or Miller due to the family milling grain into flour?

Some  have a name with a prefix that means "son of" as in MacDonald and other such Scottish names while in other cultures, you are given your first name and both your paternal and maternal surnames as is normal in Spanish and many Spanish speaking countries.

Of course, if your family emigrated to the United States, your name might have been changed because the person registering you couldn't spell it and changed it to something they could spell.  Yet have you ever wondered about other ways last names came about?

I'll share how many locals got their last names up here after a small bit of Alaskan history.  The state was divided up among the Protestants, the Catholics, the Moravians, the Russian Orthodox and a few other groups.  The area I'm was given to the Catholics where  they started setting up churches around the early 1900's or so.  Up until that point, most people had only one name.

The church took the first name of the person who headed the family group and decided that was the last name.  They were given English first names when they were baptized and the date of their baptism became their legally registered birth date.  This was because the culture was subsistence based and people followed a seasonal path.

Although most had English names, they also kept their native names. As a point of interest, the names here are neither male nor female.  They are names of those who have passed and are given to newborns.  As the child grows up, they might be called dad, or uncle or grandmother based on who had the name last.  A child grows up knowing who last had the name and the relationship of that person to others.

There are a few surnames in town that had nothing to do with the original person's name.  No one is sure why they got a last name of Hill but I think it might be because the missionaries thought the name was too hard to spell and chose something simpler but who knows.  The reasons for the obviously non-native names are now lost in the mists of time.  They just are and that is what is important
Posted by Lee MacArthur at 9:47 AM No comments:

Email ThisBlogThis!Share to TwitterShare to FacebookShare to Pinterest
Labels: Names

Surfing? Did You Know?

I grew up with surfing being something every one did (well except me) and in the spring, students disappeared to surf.  My brothers even surfed.  I never learned simply because I couldn't figure out how to balance on one and I was scared of falling in and not being able to find the board.

Every time I go to Waikiki, I stop and visit certain statue down by the beach.  The statues celebrate surfing or riding the waves.  Hawaii has a long history of people who ride the waves for hours, every  day. 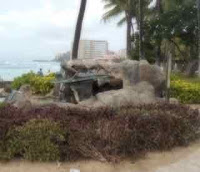 Although many spend time surfing in Waikiki and tourists pay to learn to ride the gentle waves, the serious head to the north shore.  The north shore has the waves you can really ride.

If you have every watched surfers riding just in front of the wave that is rolling and crashing down, the north shore is where you find those waves.

Now for facts about surfing, facts you may or may not know.

1.  Surfing predates Captain Cook.  When he arrived in the Hawaiian islands in 1778, the natives already had discovered or created surfing.

2.  There are two types of surfing;  short boarding and long boarding.  The short boards are much harder to use.

3.  The University of Plymouth (UK) offered the first degree in surfing!  I didn't know you could even get a degree in this sport.

4.  The first surfing contest was held in California way back in 1928.

5.  The longest surfing ride was 37 minutes long and took place in the Amazon.  I think my record was a split second.

6.  It is said that the show Gidget  from the 1960's did much to publicize surfing to help increase its popularity.

7. Kelly Slater holds the record for most money earned in a year - 3 million dollars!

8.  There is a person in Hawaii who owns over 600 surfboards.

9.  Although surfing was introduced to people in California in 1885 but it did not take off until 1907 when the local railroad used a Hawaiian surfer to advertise a local route from Los Angeles to Redondo Beach.

10.  The organizers of the Tokyo Olympics are looking at adding surfing as an Olympic sport.

Will I ever learn to surf?  I doubt it, mostly because I usually end up living either in the far north or in the desert.  I will always appreciate the skill needed to control the board when riding different waves.

Posted by Lee MacArthur at 10:41 AM No comments:

Email ThisBlogThis!Share to TwitterShare to FacebookShare to Pinterest
Labels: Surfing.