Labor Day Is Coming In The United States. 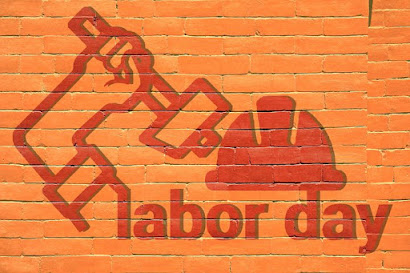 Labor Day, as celebrated in the United States, recognizes the contributions made by the American worker. The labor movement in the 19th century pushed for the recognition and in 1894, this day was finally recognized.

As the industrial revolution took place, more and more people began working 12 hour days every day of the week just to earn enough money to survive.  In addition, children as young as 5 or 6 often worked the same long days in mines, mills, and factories for way less money.  These workers often worked in unsafe conditions, with no fresh air, decent sanitary conditions, breaks, no sick leave or insurance.

The lack of decent working conditions lead to the organization of unions who pressed for better conditions, shorter hours, and benefits but it didn't happen without bloodshed.  In 1886, a gathering in Chicago turned into the Haymarket Riot when someone threw a bomb at the police.  Eight people died and  eight others were convicted of in the bombing without any real evidence.

No one is sure of who first suggested such a day.  Some say it might have been Peter J. McGuire, General Secretary of the Brotherhood of Carpenters and Joiners, who made the suggestion first.  While others say it was Michael McGuire who was a machinist before becoming secretary of local 344 branch of the International Association of Machinists in New Jersey.  It is said he proposed the holiday in 1882 during his time as secretary of the Central Labor Union in New York.  What is known is the Central Labor Union chose to accept a proposal for the Labor Day holiday and appointed members to a committee to work on it.

The first real Labor Day parade happened on September 5, 1882, when 10,000 workers took unpaid leave and marched from City Hall to Union Station in New York City. This spontaneous parade lead to others and the general idea that working men needed a holiday to celebrate their contributions.  The Central Labor Union held another parade, one year later on September 5, 1883. The idea spread across the nation but Congress refused to pass legislation recognizing "The everyday worker." At least until 1894.

On May 11, 1894, people who worked at Pullman Palace Car Company in Chicago went out on strike in protest to having their wages cut and all their union leaders fired.  Then on June 26, The American Railway union called on its members to boycott of all Pullman cars.  This lead to crippled rail traffic across the country.  In an effort to break the strike, the government sent troops to Chicago to get things back to normal, unfortunately, it lead to a series of riots resulting in at least a dozen deaths.

As a result of all the deaths and unrest, Congress passed the legislation necessary to make Labor Day official across the nation because they wanted to mend relations with the unions and workers.  President Grover Cleveland signed it into law on June 28, 1984 and Labor Day has been celebrated regularly since then.

In the early days, workers celebrated the holiday with parades filled with floats representing various unions.  They showed the public who they were but over the years, it has become a three day weekend for BBQ's to celebrate the end of summer, the beginning of fall, and sometimes the beginning of school.  You might spare a thought for those who helped create this holiday in remembrance of the working man.  Let me know what you think, I'd love to hear.  Have a great day.

Email ThisBlogThis!Share to TwitterShare to FacebookShare to Pinterest
Labels: Why Labor Day?