Records Are Back! Maybe! 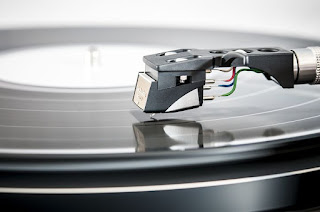 Recorded music has gone through some interesting iterations.  The first recording happened back in 1860 when Edouard-Leon Scott recorded his voice but he had no intention of playing it back.  However in 2008, that scientists developed the technology to heat the recording.  Then in 1877, Edison created the first "phonograph" to record sound on a cylinder. Ten years later, Emile Berliner took the invention one step further with his "gramophone" which used a flat record made of shellac.

This new machine allowed people to record their voices and play them back.  Many famous people recorded things they'd written and the recording remained after they died including Robert Browning.  Robert Browning recorded one of his poems shortly before he died. It was considered creepy to hear the voice of a person who had  passed on.

In 1901, the Victor Talking Machine Company was founded to produce "phonographs" which were actually gramophones.  This company quickly became the leading seller of both machines and records.  Then in 1907, they introduced the Victrola which people loved because it hit both the speaker and the player in a cabinet so it appeared to be just another piece of furniture.  People loved the ability to listen to famous opera singers and by 1921 people were purchasing over 100 million records per year.  Although "Tin Pan Alley" published most of the records, control slowly made its way to the record companies.

Then in 1925, a technological advancement hit the field.  The electrical record pressing system replaced the old mechanical process.  This made it easier to produce records with a standard speed of 78.26 RPM's aka 78's and it spurred production of classical music for the consumer over the next two years.  The 78 RPM record ran between 10 and 12 inches in diameter, held one musical tract, and held between 3 and 5 minutes of music although 3 was standard.In addition, the first magazine devoted to records began publication in 1926.  It was known as "Phonograph Monthly Review."

Furthermore, many American companies acquired or started record companies that have lasted for almost a century.  For instance, General Electric purchased the American section of Marconi Wireless and renamed it the "Radio Corporation of America" better known as RCA who purchased the Victor Talking Machine Company in 1929.  Throughout the roaring twenties, we have Deutsche Gramophon, Decca, and EMI.  In the early 1930's EMI opened the world famous Abbey Road Recording studio in London.

Although the 78 was standard in the late 1920's, a company introduced the long playing album with a speed of 33 1/3 RPM which was the same speed used by films but it didn't take off on it's own because the original albums offered a compilation of 78 RPM tunes.  Then during World War II, the government made 12 inch vinyl 78 RPM records that played an extended seven minutes of music instead of the previous 3 minutes.  The government did this to help soldiers who were off fighting for our country.

In addition, prior to World War II, records had been made out of a resin but the war caused a shortage of this material so companies switched to vinyl which turned out to be better in the long run because vinyl allows for narrower grooves so the length of the recording jumped. Furthermore, vinyl also allowed for clearer recording with less background noise.

About 3 years after World War 2 ended, Columbia introduced the 12 inch 33 1/3 RPM record which held 20 minutes of music on each side and this new record took off.  In addition, during World War II, the Germans invented a process to record people on magnetic tape so Adolph Hitler could be heard everywhere by just recording his speeches and having them played across the nation.  This technology became the widely accepted tape recorder after the war when an Army Engineer used it to create longer music.  The long playing album and the tape recorder replaced the old 78 because you could now get full length concerts to listen to.

Records continued being popular till the 1980 when alternative forms of recordings such as CD's took over and the number of records decreased through the early 21st century.  The didn't disappear completely because they were used by radio stations and jukeboxes but CD's commanded a higher market share.  Then in the late 2000's or early 2010's something happened.

People discovered records again.  A couple years ago, our local Barnes and Nobel bookstore, had one of their employees play music from records all day to introduce the fact they were starting to carry them again.  Fortunately for me, the employee had lots of really nice vintage songs by lot's of the greats from the 1960's.

The numbers of records sold began increasing around 2010.  Each years more and more were sold until in 2019, the numbers of records sold set a recent record, outselling CD's.  So it appears that records have made a serious comeback and people who were around years ago and kept their records are now happy as they don't have to start from scratch. Are you one of those who kept their records? Let me know what you think, I'd love to hear.  Have a great day.

Email ThisBlogThis!Share to TwitterShare to FacebookShare to Pinterest
Labels: Records are back?