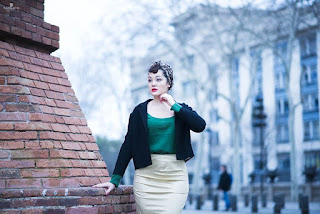 The pin-up girl is projecting an image. One where she is flirtatious but independent, teases but is never risqué, She is sexy without being exposed and she kept our men going through world war II.

Betty Gable, an actress from the 30's and 40's, was one of the most popular pin-up girls from the second world war.  She was extremely popular.  In fact, she was so popular, you could find her picture all over the world, where ever American soldiers ended up.  She was not the only one, just one of many.

Pinup girls have been around a little while int he form of advertisements showing beautiful women who worked in Burlesque.  Although women often partially undressed during a burlesque performance, she never fully stripped.  This type of advertising began in the 1860's or so and provided some of the early pin-ups for society.

The next wave appeared on calendars in the early 1900's.  At this point, the calendar had one picture with the month and date part at the bottom.  In 1903, interest perked up when a female was featured instead of George Washington or a business.  "Cosette", by modern standards shows nothing, but back in 1903 would have gained attention.  She appears to be wearing little but possibly a skin tight body suit with twinkly things covering her vital parts.  with a background of feathers around her head and she is seated on a stool.

About the same time, artist Charles Dana Gibson created drawings of the "ideal" woman from her hair all the way down to her toes. The woman had the perfect hourglass figure, luscious hair piled on top of her head, and kissable lips  but she was independent and that was appealing to many.  She became the icon for her times and her picture was hung on walls because it was the only way, anyone could have her.

At the time, Charles Dana Gibson created the drawings, he worked for Life Magazine as an artist.  As part of his job, he drew "The Gibson Girl" for different covers of Life Magazine.  In addition, the covers were so popular that other magazines such as Century Magazine, Puck Magazine, and Cosmopolitan Magazine created their own version of the "Gibson Girl" and ran them until 1932.

The government used the idea of pin-up girls to help get men to enlist during World War I.  They'd often dress a female in a sexy version of the male uniform and include a phrase such as "I wish I were a man, so I could join the Navy".  Although they are a type of propaganda, the women made men dream because they were perfect.

Once the war ended, and the "Roaring 20's" began, the pin-up ideal changed so she became more free-spirited with her shorter skirt, bobbed hair, who drank and smoked, and showed skin.  She escaped the restrictions of society and lived her life as she pleased.  Many, many women tried to emulate these dream women but they never quite made it.

Many of these pin-up girls appeared on the cover of fledgling movie magazines because they discovered these teasing pictures brought people to watch movies.  So during the 1930's, female stars were painted in costumes and positions that teased the man and by the 1940's when World War II broke out, they were in a position to step in to help the government make pin-ups to increase recruiting and for men to take with them overseas.

After World War II, the pin-up girl went from being drawn by an artist to appearing in photographs.  In 1953, Hugh Hefner founded Playboy magazines which featured women in the center fold.  In addition, these women went from showing little to being naked as times changed and he pushed limits.  Now one can find pin-ups of women on motorcycles, next to mining equipment, and other scenarios found in calendars and magazines.

There is a a movement to bring back the vintage pin-up.  You can find videos on how to recreate the look and have pictures taken in the style. Where does it go from here?  Who knows.  Let me know what you think, I'd love to hear.  Have a great day.

Email ThisBlogThis!Share to TwitterShare to FacebookShare to Pinterest
Labels: The Pin-up