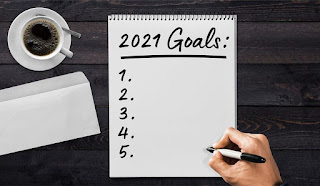 Ok, It's the new year. We've watched our weight inch up some, noticed we aren't as active as we were a year ago.  Since it's the new year, we've made a list and put on all the things we want to change or improve.  Most likely the resolution was exercise more, work on saving money, losing weight, or eating better.  Other popular resolutions include reducing stress, sleeping more, budgeting better, traveling more, learning a new skill or focusing on spiritual growth.

Unfortunately, very few people who make resolutions are able to stick to all of them but about a fifth of those who made goals managed to stick to some of them.  Most people were unable to stick to any.  In fact, one study found that most people have given up by January 12th. In other words, they lasted just 12 days before they gave up.

There are several reasons people fail to meet their goals.  One big reason for not making it is simply that the person tries to do too much at once.  That's right, too much.  For instance, you might decide to lose weight so you set yourself a goal of 50 pounds for the year.  So to accomplish it, you put yourself on a diet while signing up with the local gym and you hit it hard.  Another is the resolution made was not one that is not important to them, rather it is based on what others urge.  There are things one can do to increase the chance of success.

First, one needs to mentally prepare for the new year by reviewing last year's resolutions to determine which goals were met and which weren't.  It is also suggested that one should look at one's successes from the previous year before looking at what was not successful.  It is important to set a goal that is meaningful to you rather than to make others happy.  For instance, your mom has been bothering you to lose a couple of pounds but you are happy with your weight, yet you make that a resolution because it makes your mom happy.

It is also important to limit the number of resolutions to something manageable.  For instance, you've been thinking about learning a new language but you can't decide between Spanish, German, Gaelic so you compromise on learning all three.  You've made it harder to meet the resolution, so choose one language to increase your chances of success.

Another important aspect for success to to make sure your resolutions are specific, measurable, doable, relevant and has a deadline.  Instead of saying exercise more, you might change that to exercising twice a week for 30 minutes each time, or going for a 30 minute walk three times a week.  This is specific, doable, easy to measure and has a deadline.

As mentioned before, sometimes a person jumps in all at once, rather than breaking the large goal into smaller attainable chunks.  If you say lose weight, you might have to sit down and figure out what you need to do to lose weight.  When things are broken down into smaller chunks, it is so much easier to handle. Another thing to do is to write down your goals and share them with others. When the goals are written down, they are there in front of you and have become real.  When goals or resolutions are shared with others, you might find someone who has the same exercising goal and you now have a partner.

Finally, make sure to regularly review your progress towards your goals to see how you are doing.  Once a month, look at the overall picture in order to plan how you'll support your resolution, then once a week see how you are doing, and don't be afraid to post daily reminders to help you succeed.  If you fall along the way, pick yourself up and continue on your path.  It is normal to run into setbacks so tell yourself it's ok and continue.

Make sure to take time to celebrate the small victories but if you discover your resolution was to broad or big, don't be afraid to modify it at any point during the year.  Let me know what you think, I'd love to hear.  Have a great year and welcome to 2021.