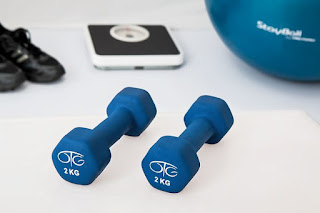 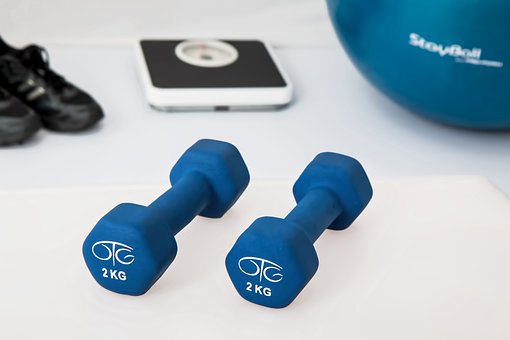 There are times when I use light weights to enhance my workout but I have others telling me, I need to use heavier weights so I'll develop some muscles (I look like Olive Oil).  I heard that when one combines light weights with exercises designed to work multiple parts of the body at once for efficiency while others swear by heavy weights to target specific muscles.  So which is better?  It depends on your goal.

Although everyone does agree that some form of resistance training is necessary for good health, there is some disagreement on the form used.  One of the points of dispute is whether one should perform a few repetitions using heavy weights or more repetitions using light weights. The difference is in performing 15 bicep curls with  3 pound weights versus 5 bicep curls using 15 pound weights. One takes less time than the other but there are more goal differences.

If you use lighter weights with more repetitions, it is better for creating  a leaner, more defined effect so the person doesn't bulk up.  This type of weights achieves the leaner look because the entire length of the muscle moves the weight using less power.  This type of resistance training causes the muscle groups to begin a lactic acid burn which can cause fat to melt in the following days.  You want enough repetitions to cause your muscles to and burn.

Another good thing about using lighter weights is that the user has better control and suffered fewer injuries.  Lighter weights allow people to properly utilize their full range of motion precisely.  Furthermore, using the lighter weights can help if someone has joint issues because they do not exasperate the situation.  In addition, using lighter weights means a person needs less time to recover between sets and sessions and it can lead to people burning more calories. Unfortunately,  this method will neither build muscles quickly nor will it build strength.

On the other hand, using heavier weights for shorter repetitions can help people build bulging muscles.  The weights need to be heavy enough that you can only do a few repetitions because you want to gain strength.  In addition, a person only builds muscle if they consume more calories than they use.  Furthermore, using higher weights with fewer repetitions, does a better job of building muscles and strength, bone density, and more loss of fat. It also takes longer to recover from workouts but the workout is usually longer and your joints undergo more stress.

One study found that it didn't matter whether you use light or heavy weights, as long as you push to maximum effect, you build muscle.  The method you chose is dependent on the desired result.  The key is to use a progressive overload which means one should either increase the number or repetitions or the amount lifted over time but it is possible one will reach a plateau.

It is suggested that one use both light and heavy weights during workouts.  Just make sure to work until the muscles are fatigued as that is the key.  Always remember to change the weight or the number of repetitions and to observe form.  Let me know what you think, I'd love to hear.  Have a great day.

Email ThisBlogThis!Share to TwitterShare to FacebookShare to Pinterest
Labels: Light Vs Heavy Weights