Bee Venom For The Face 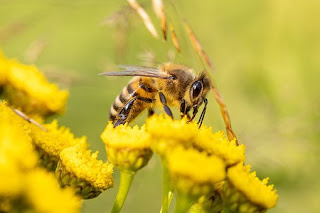 For most of us, our encounter with bee has been in summer when we've gotten stung by bees.  I've had my few encounters over my life and they hurt.  Recently, I discovered that bee venom is now being found in facial products.

The idea behind using bee venom is that it is supposed to reduce wrinkles and inflammation.  It is considered a natural product and is said to help both acne and signs of aging.  Of course, as one ages, certain things will happen and you can't avoid the process completely but you can work on reducing the effects.

Officially, bee venom, is a colorless, liquid poison deposited by the bee when it stings.  The bee venom is a mixture of inflammatory and anti-inflammatory ingredients such as sugar, minerals, enzymes, and amino acids. One of the compounds contained in bee venom Melittin, contains 26 amino acids and makes up about half of the dry weight of the venom. In addition, it contains two peptides, apamin and adolapin which possess anti-bacterial effects.

Furthermore, it has been found that bee venom is good for treating both acne and aging.  It is specifically recommended for use with common, everyday acne, aka pimples.  For acne, it is best used in conjunction with other products such as a salicylic based wash.

According to some research, bee venom, especially in purified form, appears to be able to increase collagen, while stopping sun damage.  When used twice a day, the bee venom reduced the depth of wrinkles, and number of wrinkles in one study.  When bee venom is applied to the skin, it causes it to inflame and trigger a response by the skin to heal wounds.  This causes the skin to produce collagen.

The nice thing about bee venom is that it is easily absorbed by the skin where it goes down fairly deep into the skin so it looks plumper, lifted, and much firmer.  It plumps the skin by increasing blood circulation, and in the process fills and smooths the fine lines, and wrinkles.  The increased blood supply hits the area, it encourages increased production of collagen and elastin.

Furthermore, it is recommended that bee venom be used in conjunction with other products to get the best results.  When first using it, it is recommended one carry out a patch test because of possible reactions.  If there is no reaction after 24 hours, it is safe to use it all over your face.  It is best to use it after your face has been cleaned and before the application of moisturizer.

I regularly use three products that contain bee venom every night.  One is a serum, one is an essence, and one is a face cream. I've noticed that my wrinkles are a bit less and it leaves my skin feeling nice and it looks decent.  I like using it at night because I tend to use other products during the day.  Let me know what you think, I'd love to hear.  Have a great day.