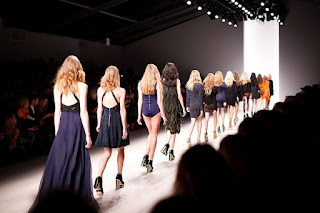 Many of us are fascinated when we get to see clips for the current fashion shows from New York, Milan, or London.  We smile or groan at each entry thinking either “I’d wear that” or “Which alien was that designed for?”

Early on, many designers hired people to wear their designs out while walking, at racetracks, or other social events so they’d be photographed and commented on in the local publications.  It is said that the modern fashion show began during the 1850’s when fashion designer Charles Worth used live models instead of mannequins to show off his latest creations. This offered patrons a chance to sit comfortably while looking at current fashions rather than walking from mannequin to mannequin.

Other designers heard about this new method of showing off designs and adopted it too. From Paris, the idea spread to London and New York by the beginning of the 20th century because they saw it as a great marketing tool. These “fashion parades” were often small and private and sponsored by the designer. These parades prohibited photography as a way of protecting their designs from being stolen and copied.  Even many of the early Americandepartment stores, held shows to show what

In fact, by 1918 since so many buyers were flocking to Europe to purchase outfits, many of the couture houses set standard dates to present shows twice a year so buyers could plan ahead. Over the next forty years, fashion houses opened up the fashion parade to more and more people so by the end  of World War II, they were using the shows as a way of publicising their name and designs. Some well known designers such as Lucille and Poiret turned their shows into social events.

During World War II, American fashion designers came to the forefront because of Nazi control of Europe but  it was in the post World War II era that many designers became household names such as Christian Dior who created the tight bodice with wide flowy skirts dubbed the “New Look”.  Others such as Coco Chanel used the post war years to really establish their design houses.

Most of these fashion shows lasted about an hour. People were crammed into a salon where they sat around the runway to check the seasonal offerings.  Photographers mingled with the crowd while soft music played in the background.

As the years passed, the flavor of these shows changed.  In the 1960’s the stoney faced look gave way to models who were encouraged to show their personalities.  In the 1980’s and 90’s the avant garde shows began with the theatrical presentation filled with lights, muscis, and sound effects.  More of what we are familiar with when we catch a news clip highlighting  the latest fashion show.

In addition, certain designers took things a step further and presented shows in wind tunnels, sold out stadiums, airport terminals, supermarkets, chess sets and so much more, taking it to a more adventurous level. Let me know what you think, I’d love to hear.