Should Men and Women Exercise Differently? 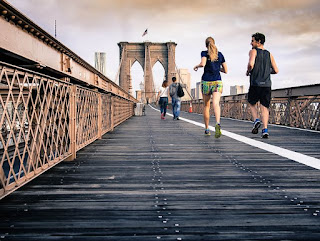 When I was growing up, my mother would tell me that men and women needed to exercise differently because they were different.  Of course, this attitude might be from the fact my mother grew up where men and women didn't even have P.E. together. I know at most gyms and even in the park, I see both sexes doing the same exercises so maybe that isn't true.

According to several sources, many women participate in hard core exercising or as elite athletes. Although, there are both physical and psychological differences between men and women, they can work out using the same exercises but not always exactly the same.

First thing to know is that there are no exercises that are completely off limits to women unless they have conditions that do not allow it, the same could be said of men but it is often how the exercise is done that may be slightly different.  Much of this is determined by the shape and structure of a woman's pelvis or the looseness of your ligaments.

Women sometimes suffer from an overarch in the lower back which means it is tilted too far forward. This can cause pain on the spine when certain exercises are done but if one pays close attention, it is possible to perform the exercise to avoid the problem.  On the other hand, if you are extremely flexible, it means your ligaments are looser but this can lead to our joints being injured more easily. In addition, more women suffer from both conditions than men.

Although men and women are able to do the the same exercises, women will not become as strong or gain speed at the same rate.  Those factors which are found in endurance athletes such as ability of your heart, muscles, and lungs to use oxygen or how long you are able to exercise at the highest rate tend to be higher for men.  In addition, men tend to have larger skeletons and more muscle mass than women even if they are the same time.

Since women's bodies are built to give birth to babies, they tend their upper body muscle mass is about 30 percent less than a man's but that doesn't stop a woman from developing muscles and build endurance.  If a woman wants to build or tone muscles, the best way is to incorporate resistance training such as squats, and deadlifts using 80 to 90 percent of your maximum.

Technically, muscles in both men and women are the same in both look and functionality. Unfortunately, there is the idea out there that if a women uses the same exercises a man uses to build muscle, they will bulk up just like a man but in reality they won't. Lifting the heavier weights will help build lean muscles while increasing metabolism so you tone up and lose weight.

On the other hand, women and men tend to target different areas when working out because they want different results such as better defined muscles for men and better gluten for women.  Either way, it is important to create a workout that works best for the individual while having specific goals set so you know what you want to work on.

On Wednesday, I'll be looking at the types of exercises preferred by women and men.  Although exercise in general is not gender specific, preferences are.  Let me know what you think, I'd love to hear.  Have a great day.

Email ThisBlogThis!Share to TwitterShare to FacebookShare to Pinterest
Labels: Is exercise gender specific?