I am currently in Los Angeles and yesterday, I had the opportunity to visit Getty Villa which opened as a museum back in the mid 60's.  One part of the exhibit showed ancient perfume flasks and there was a short video showing how they made them. 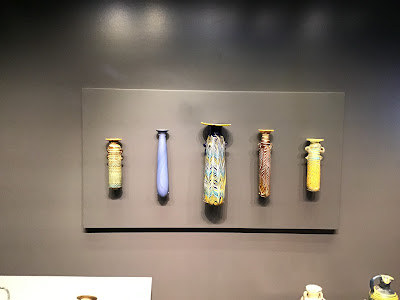 These flasks help perfumes and were all made in about the same way.  I was fascinated as I watched the video .  These two pictures are of the finished flasks.  You can see the different shapes and colors they were found in. 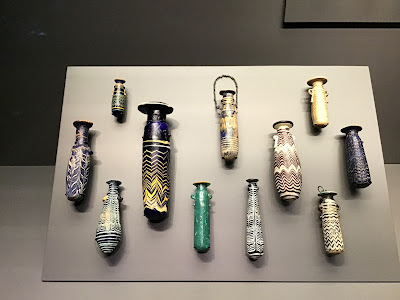 To make these flasks they put together a mixture of something like dung, sand, and clay to form the core.  They mixed the ingredients until they were totally moldable and then formed a cylindrical shape they then placed a long like metal rod to.  They let the core dry enough to shape it with a knife into the perfect shape they wanted.  They might scrape off enough material to make a narrow top with a wider bottom or they might make it so it is about the same shape all the way down.
Once the shape is satisfactory, they dipped it in glass that is a solid color.  Once they've got the base done, they got a different colored glass and carefully dripped it on as they swirled the base so it spiraled around the container.  They might do two or three colors by the time they were done with it.  Once the colors had been applied and they spiraled around the container, they took a sharp object and used it to move the colors down or up so they formed interesting patterns.
Once the patterns were completed and satisfactory, they would shape the mouth of the jar.  Once it was completed and the glass cooled, they would pull the metal rod out and any core that came with it.  If there was still core left, they would tap the container lightly and dump the dust out.  Now it was done and they could fill it with perfume and add a stopper.
I love knowing how they did this.  I hope you enjoyed the description. Let me know what you think, I'd love to hear.  Have a great weekend.
Posted by Lee MacArthur at 5:00 AM