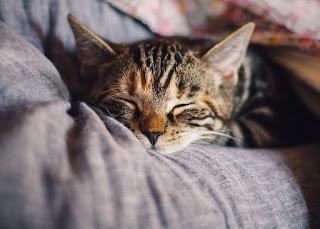 Throughout time and across the world, various groups have developed some rather weird and bizarre beliefs about sleep. My mother always told us not to eat after 7 pm or we'd never be able to sleep because our bodies were too busy digesting food and would keep us awake.

The word nightmare is believed to have evolved from "Mara" who was an evil Germanic spirit who brought bad dreams to those it visited.  Russian and Slavic mothers put knives in the cradles of their infants to protect them from a nasty night creature.

In ancient Egypt, the Egyptians believed they could banish nightmares by placing four statues of cobras at the four corners of the room while chanting an incantation at the same time.  They believed these statues would spit venom at any invading nightmare or creature who tried to bring a nightmare.

Furthermore, it was also believed that the gods communicated with certain people such as the Oracle of Delphi via their dreams.  In ancient mythology, Hypos was the god of sleep and brother to Thantos the god of death because it was believed that sleep and death were similar.

In addition, Plato believed that dreams originated in the liver.  He believed the liver was sensitive to changes in the body and would change shape to become sweet or bitter and would influence dreams but Aristotle thought the soul left the body and could interpret information contained in breezes.

Early Christians believed that demons could invade a person's sleep and tempt them into sinful behavior by creating erotic dreams.  Later, beginning in the 12th century, they thought these same demons could take over a woman's body and cause her to become pregnant. The demons in this case were incubus (male) and succubus (female) and it was a strong belief.  Along the way, others began to believe that nightmares were caused by the Devil and a person having too much blood in their body.  It was recommended that people pray every night to protect them from the Devil and it's influence.

A century or two later, people believed that wearing rubies, coral and diamonds to bed provided protection from bad dreams.  It wasn't long before opals, topaz,  and emeralds joined the list of protective jewels.  For people who could not afford these jewels, they could drink wine that had had dragons tongue or gallbladder boiled in it. If you couldn't find a dragon, you could rub the blood of a mink on your forehead for protection.

As time has passed and scientists have been able to research various beliefs, we have learned more about sleep, dreams, and nightmares.  Let me know what you think, I'd love to hear. Have a great day.

Email ThisBlogThis!Share to TwitterShare to FacebookShare to Pinterest
Labels: Myths About Sleep.