Is Honey Better Than Sugar? 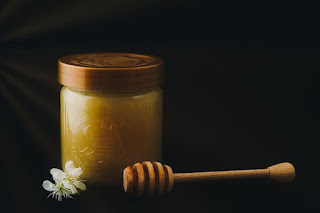 When people want to cut down on sugar, they tend to switch to honey because it has a reputation for being healthier but is that true?  I use both, honey for putting on hot bread with butter and sugar in my breakfast cakes.

The thing is that both sugar and honey are composed of fructose and glucose but their percentages are different.  In addition, both are composed of carbohydrates and both can cause weight game if consumed in too high a quantity.

Honey is made up of nectar collected from flowers by bees.  Honey is made up of about 40 percent fructose and 30 percent glucose combined with water.  In addition, it contains trace amounts of enzymes, amino acids, B vitamins, Vitamin C, minerals, and antioxidants known as flavonoids.

Since honey is made from the nectar of flowers, it comes in so many different flavors and colors. Some flavors are milder while others are heavier and they range from light colored to a deep dark amber.  I tend to like the milder flavored ones that are usually lighter.  No matter what, honey will cause a persons blood sugar levels to spike.

Because honey has a higher proportion of fructose and less glucose, it has a sweeter flavor which means a person uses less sweetener but it is high in calories and may not be safe for children under a year old.  On the other hand, although sugar is also made up of about 50 percent glucose and 50 percent fructose.

Sugar is primarily made from sugar beets or sugar cane and must go through a multistep process to reach the granulated form we are most familiar with. If you go to a store, you'll see sugar mostly as white, brown, or raw.  The brown sugar offered in stores is actually white sugar mixed with molasses while raw sugar is a bit less processed than white.

The nice thing about sugar is that it has a long shelf life where as honey crystalizes, its lower in calories, and it naturally occurs. In addition, it is a good form of fast energy and it contains 16 calories per teaspoon while honey is 22 calories for the same teaspoon.  Sugar has a higher glycemic index than honey so it raises blood sugar a lot faster

Unfortunately, it can cause weight gain, make a person more likely to get certain diseases, and can be harder to digest.  The bottom line is that both can cause weight gain is too much is consumed, can increase dental decay, cause certain diseases, and cause blood sugar to rise and then crash.  It is strongly recommended that people watch the amount of both sugar and honey they consume.

Although there are sugar substitutes such as saccharin are not recommended because they can increase sugar cravings, mess with the bacteria in your guts, and effect insulin sensitivity.  I am aware of alternate types of sweetness such as those made out of jackfruit or other and I'll explore those in the near future.  Let me know what you think, I'd love to hear.  Have a great day.

Email ThisBlogThis!Share to TwitterShare to FacebookShare to Pinterest
Labels: Honey vs Sugar.