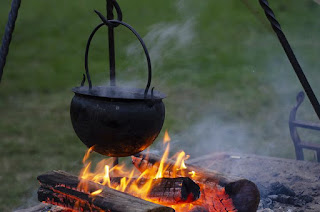 Growing up, my dad loved to take us camping.  Sometimes we'd backpack into some area, other times, we settled in a campground but no matter what, my dad never purchased those "Hiking" or "Backpacking" foods.  Everything was made from scratch except for the milk and tang.  It wasn't until I got to college that I learned about freeze dried foods designed for camping or backpacking.  Imagine, a whole meal in a small package you just added water to and heated.

I've often wondered how freeze drying foods all began because they have been around in the form of coffee or tea for a very long time.  There is a bit of conflicting information concerning who invented it and when but most agree that the Incas and Buddist monks who lived high in the mountains used the elevation and cold nights to freeze dry their foods.  As far as the modern freeze drying techniques, it appears that several different people had something to do with it.

According to an article in the Food Technology Magazine, freeze drying was invented in 1906 by Jacques-Arsene d'Arsonval who worked at the College de France in Paris. Yet according a different source, Benedict and Manning created the first freeze dryer in 1905 which was used to dry blood tissues using a chemical pump. A third source attributes the modern process was invented by Mr. Richard Altmann in 1890.  What is clear is that the first freeze drying techniques were designed to preserve organs and tissues.

For the most part, freeze drying was used primarily in the medical field to preserve organs, tissues, and vaccines. Freeze drying played an important part during World War II because it allowed blood to be preserved without refrigeration so medical units could take care of the wounded.

The application of the freeze drying process wasn't used on foods until after World War II.  The first freeze dried foods began appearing during the 1950's when companies began drying foods for commercial use but it was the space program in the 1960's that provided a boost to the market.  NASA explored the use of freeze dried foods for space flights and in the process created a public desire for freeze dried ice cream.

Until NASA requested dried foods for their program and the freeze dried ice cream which they used as a way of letting people taste "Astronaut" foods, only groups like the Boy and Girl Scouts, other outdoor groups used freeze dried foods.

Then in the early 1970's, companies utilized advertising to increase the need for freeze dried foods.  One area was to appeal to people who spent a lot of time backpacking or away from civilization because freeze dried foods were extremely light.  The move created more demand because backpacker could haul a weeks worth of foods in less space and with less weight. These companies developed products like stews, lasagna, and such  for campers and backpackers who wanted "real" foods.  Eventually, you could get just about any type of meal from breakfast to dinner.

Now you can find freeze dried foods in your local grocery store where you can find it in those #10 cans.  These appeal to people who are prepping for various disasters or want it due to their locations.  I keep freeze dried eggs for baking because the local stores are often out and most people tend to have dried milk which is milk that has actually been freeze dried.  Let me know what you think, I'd love to hear.  have a great day.