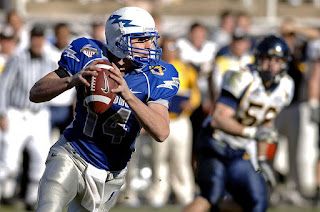 As I mentioned Wednesday, my dad and brothers spent much of Thanksgiving day watching either parades, football games, or both.  I think many other houses share the same tradition and it's gotten to the point, it isn't Thanksgiving without either.  Historically, football has gone hand in hand with Thanksgiving.

President Abraham Lincoln designated Thanksgiving as a National Holiday back in 1863 and in 1876 the very first Thanksgiving day football game took place when Yale went up against Princeton.  At this point, the game was moving from rugby to what we see now.

By 1900 as perfect for the Intercollegiate Football Association scheduled their playoff games for the Thanksgiving weekend.  This weekend has a history of famous clashes such as the University of Michigan versus the University of Chicago or Boston Latin versus the English High School of Boston which continue to today.  Furthermore, there were hundreds of games played over the Thanksgiving day weekend.

Around 1900, professional football started developing and they chose this weekend for their games, often scheduling games for championship titles or for big rivalry games.  When the National Football League got it's start in 1920, it chose this weekend to host up to 6 games for the population.  In 1934, the owner of the Detroit Lions began hosting games as a way to bring attention to his new franchise and this team plays one of the three games every Thanksgiving even today.

In addition, the owner of the Detroit Lions also owned a radio station and he arranged for the first game between the Detroit Lions and the Chicago Bears to be broadcast to 94 other stations when his team lost but it began a new tradition.  The Dallas Cowboys followed this idea by arranging to have their holiday game broadcast in 1966 and they became the second team to play on Thanksgiving.

As far as parades, Macy's held their parade back in 1924 to celebrate their flagship store and remind people that Christmas was coming.  In fact, the first parade took place first thing in the morning so spectators could head off later in the day to watch the huge Syracuse versus Columbia game.  The parade was a success and took place every year.  At first, in 1932, a local radio station began broadcasting commentary on the Macy's Thanksgiving Day parade but it wasn't until 1946, they switched to broadcasting it via a television.

Due to the coronavirus, Macy's will have their parade but it will only have the last part of the route just in front of Macy's store.  The parade will be broadcast as usual but place over a 3 day period so all participants are able to observe normal social distancing.  The store has cut back on the number or participants to make it easier to meet all recommendations for safety.

As you enjoy watching you football games or the parade, remember how long these two have been broadcast and become entrenched and associated with Thanksgiving.  They are as much a part of the celebration as turkey and having relatives visit.  Enjoy your weekend.  Let me know what you think, I'd love to hear.  have a great day.