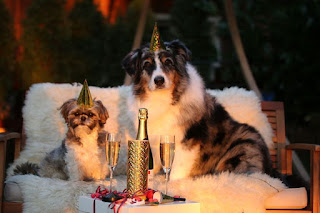 Living way out west, I get to watch the different New Year's Eve celebrations beginning with the most famous one from Times Square and ending with a local fireworks display.  Each time zone with it's own flavor and celebrities who help ring in the New Year.  It boils down to over 6 hours of entertainment while waiting for each countdown until I get a chance to celebrate that magical hour.

I had a friend who for years would sprint into New York City a couple days before the new year to help put together the ball for the televised ceremony with Dick Clark and others.  Rather than give you a history of the ball, I'm sharing some interesting facts about the Times Square celebration.

First of all, they have dropped a ball in Times Square something like 111 times beginning in 1907.  As with any tradition, they were unable to drop the ball in 1942 and 1943 due to the lighting restrictions of World War II.  Although, the ball didn't drop, people still assembled to ring in the new year and remember those who had given their lives to the war.

The current ball is covered with 2688 hand made Waterford crystals imported from Ireland. In addition, the ball has 32,256 LED lights spread across the ball which are capable of creating over 16 million colors and effects.  The colors are created by the type of lighting chamber created to use some of the light reflected off the crystals. The ball requires 50,000 Watts of power. Although that seems like a lot of power, the city uses 161 megawatts to light up Times Square.

Normally between between 300,000 and 450,000 people visit Times Square every single day but on New Year's Eve, the number jumped to more than 500,000 pedestrians back in 1998 and last year, over a million people ventured out to watch the ball drop in person. In addition, it is estimated that over one billion people watch the event via television world wide.

On New Year's eve at 6 pm, the city raises the ball to the top of it's 77 foot pole in preparation for the drop 6 hours later.  Those 32,000 lights I mentioned earlier?  They are used to help create a light show to entertain people until the ball is dropped. The shows are preprogrammed and each hour follows a different theme as a way of building anticipation for the drop. The ball is designed to take a full minute to descend.

The city of New York used around 1200 cameras to monitor the crowds in addition to thousands of police officers who are on duty. At the end of the celebration, the city will clean up over 48 tons of trash from confetti, hats, balloons, pizza boxes, bottles, and other things.  This takes about 200 sanitation workers close to 7 hours to fully clean the area and for it to open up again for normal business.

Quite the celebration. I am one of the people who watch the celebration from the comfort of my house.  Let me know what you think, I'd love to hear. Have a great day.