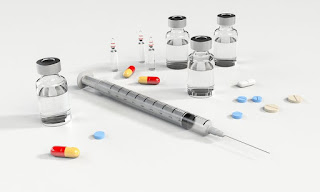 I don't know about you, but I end up relying on over the counter medicines to keep me healthy.  I keep cough syrup, pain reliever, and cold tablets.  No, I don't use them everyday.  I have them should I need them since there is no drug store in town.  Fortunately, most medicines today, even the over the counter varieties, are controlled by the government but this was not always true.  Back before the 20th century, medicines were not regulated and you never knew what was in it.

One wonder drug discovered by scientists and used by pharmaceutical companies is now extremely illegal.  Back in the 1880's, scientists isolated the active ingredients in the coca leaf and soon cocaine hit the markets.  For instance, an ophthalmologist discovered he could use drops of a cocaine solution in a person's eye to cut down on bleeding, make the eye immobile, and cut down on the pain experienced, making eye surgery safer and easier. Pretty soon, cocaine, was marketed to treat everything from toothaches, to depression, to sinusitis, lethargy, and so much more.  It was sold as a powder, tonic, lozenges, and even in cigarettes and it was sold everywhere including the Sears and Roebuck catalog.

Unfortunately, it was extremely addictive and often caused the symptoms it was said to treat. One didn't need a prescription or to visit a doctor.  Due to the ease of obtaining it, people used it and by 1902, it is estimated that over 200,000 people were addicted to it.  The government had to pass a law in 1914, prohibited it.

During the same time period, scientists introduced heroine as a nonaddictive and save substitute for morphine.  Although, heroine had actually been formulated in 1870, it didn't reach the market until 1895 when a chemist working for Bayer aspirin discovered the paper on it and helped create heroine laced aspirin. Bayer believed it was five times more effective than morphine and much safer so they marketed the heroin laced aspirin as a way to treat sore throats, coughs, and colds.  In the process, children became addicted to the heroin laced aspirins and doctors became concerned.  Eventually, Bayer eliminated this particular product in 1913 and it was eventually prohibited by the government.

Arsenic was used to treat external ulcers and cancer since ancient times.  It was also used to treat V.D by medical personal before the availability of penicillin.  By the 19th century, arsenic was being prescribed to treat diseases such as asthma, eczema, anemia, leukemia, and other diseases.  It could be administered as a vapor, injected, or given as an enema.It also appeared in patent medicines sold over the counter to people who wanted to cure malaria, arthritis, or diabetes. Unfortunately,  arsenic could kill a person just as soon as cure them.

Another popular ingredient in medicines was mercury.  It often appeared in powders to help babies during teething. It was also advertised as a way of relieve bowel troubles and to make children nice and plump.  Often children displayed symptoms such as running a high fever, banging their heads, having skin peel off after taking teething powders.  These symptoms were used to identify "Pink's disease" but it took a long time to determine mercury was responsible. In addition, it was said to relieve a variety of ailments including constipation, influenza, and parasites and many famous people used it.

Once the United States began controlling over the counter medicines, most of these ingredients disappeared, making life safer and better.  Let me know what you think, I'd love to hear.  Have a great day.

Email ThisBlogThis!Share to TwitterShare to FacebookShare to Pinterest
Labels: Medicines could kill.