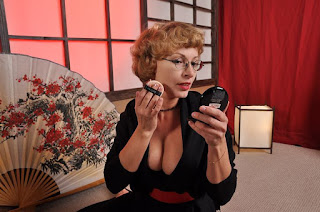 Growing up, I remember my great aunts and grandmothers all finishing off their makeup with a layer of face powder.  If their faces became shiny, they'd pull out the powder and dab the shine away.  A fashionable lady always carried her lipstick and compact so she could touch things up as needed.

Women have been using face powder since ancient times.  In Roman times, women used a white face powder made out of orris root and other things.  Roman women wanted light skin so they'd meet the ideal.  In China, women used rice powder with other things to create the pale face and cover any imperfections.

There was a reason the early face powders were white.  The whiter and smoother a woman's skin, the higher her social class and status within society. This idea of perfect white skin continued for centuries up to the Middle Ages.  In fact, women during the Middle Ages often used flour as face powder to obtain the white skin and would bleach their skin with lye to get rid of freckles.  The powdered face became the epitome of beauty during this time period.

The standard of the white face continued through the time of Queen Elizabeth.  It was during this time that working women decided to follow the standard by using flour instead of the white powder used by the upper classes.  In addition, actors at the Globe Theater used a mixture of white lead and vinegar to obtain the white face but unfortunately, it irritated their skin and was not healthy at all.

The idea of such pale skin continued almost up to the 20th century but the materials used changed so they used more powder without the toxic ingredients.  In fact, women began using a bit more powder during Victorian and Edwardian times.  It was easy to find recipes to make your own face powder or you might buy some in unmarked envelopes.  By the 1920's powders were quite popular and appeared in different shades such as white, natural, or flesh.

At the beginning of the 20th century, women who wore makeup would wear it so that their face looked absolutely but when the 1920's hit, flappers disagreed.  They would pull out their compacts to retouch their faces so everyone knew they wore makeup at tables rather than heading to the ladies room to do it discretely.  Face powder was the big makeup used because most foundations were nothing more than tinted moisturizers that disappeared.  They relied on face powder to provide the proper color.

Companies manufactured various colors for all people.  C.J. Walker and others began making colors appropriate for darker skins in the 1920s and 30's while other companies made tones for folks like me with fair skin.  The development of colored powders changed the ideal from white skin to natural skin so women could be tan, nude, or any other shade.  It freed women from the rigid idea of beauty. Then in the 1960's Bill Nye from Hollywood created the Banana powder which had a yellowish tint and helped eliminate the redness of skin.  Over the following years, it became normal to include powder as part of the normal routine.

On Friday, I'll have the second part of this article and it will focus on the different types of face powder available and their uses.  Let me know what you think, I'd love to hear.  Have a great day.