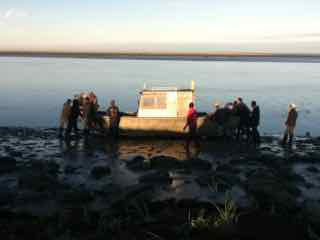 One day, we got the kids up fairly early so we'd be ready to go clamming while the tide was out and just coming in.

As you can see, it was low tide and the guys had to push the boats out, into the water so we could head down to the mud flats. You can't dig for clams when the water is in.

It wasn't too far away and so much fun.


Sprinkled along the mud flats, the kids found star fish, jelly fish, and barnacles scattered around.

It was cool watching the jelly fish float around in extremely shallow water.  They were about 6 inches in diameter.  I couldn't believe both star fish and jelly fish existed this far north.

The thing about the mud, it was really really sucky in terms of if you stayed in a spot too long, you sank in and then struggled to get yourself loose.


Everyone had rain boots on.  Some folks used shovels to dig down into the muck.  It was interesting the clams were dark and matched the color of the sand/mud they lived in.

If water went into the hole, the clams started going as far down as they could.

They came out all muddy and had to be rinsed by wading a couple feet out into the river and dipping them in.

It was sometimes hard to tell the difference between a clam and a clod of dirt.


Several of the adults grabbed the fresh clams, opened and ate them raw.  No I didn't try one but I helped clean a bucket filled with them.

It wasn't long before the tide came in enough that we had to leave the area.  We couldn't wait any longer for two reasons.  First the boats were parked out a ways and we had to be able to get to them.  Second, we'd hit a part of the beach where clams were no longer found.

So it was back to camp to make lunch and have a nice afternoon.  We never got the clam chowder made because they forgot to pack the dried milk.  Instead, people took the clams home to enjoy.

I hope you enjoyed this information.  It was fun going clamming and enjoying watching the wildlife found in the water.

Have a good day.
Posted by Lee MacArthur at 4:00 AM

Email ThisBlogThis!Share to TwitterShare to FacebookShare to Pinterest
Labels: Clamming