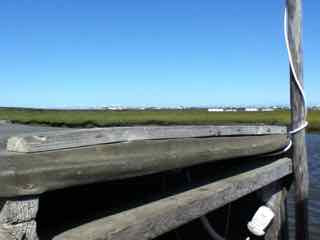 We left town about 2 PM and headed down river.  The town I live in right now has only been here since about 1950.  There are elders here who remember moving to this location. This trip took us to a camping place about half way between the previous town and the one before it.

In the distance you can see the current town.  It has about 900 to 1000 people. The river zig-zagged across the tundra winding back and forth.


After going down river, across the bay and back up a second river, we passed by the old village.  All that remains of the original village is the old Catholic church.  The fish and wildlife people built  a brand new building because they are always out there but the old church will remain because people still use it.

The village existed there only for 2 years because the ground made it hard to build and it flooded so anything built was damaged. The last time I was there, I saw the remnants of a steam house.

This hill you see is actually the village before they moved to the old town.  They say this place is about 2500 years old.  They used to build sod houses that had a wooden frame with sod covering it for protection

You can still see the openings to where the houses used to be but its no longer safe to go inside.

A family is currently building a cabin among the remains where their last cabin was. One of the chaperones found a curved knife handle.

When someone died, they were buried with all their possessions.  If you came by and saw something you wanted like a tea kettle, you could leave something as simple as water in exchange for the item.  Water is considered precious and a good item for trade so the chaperone sprinkled water around the place as payment for the handle.


From here we followed the river a bit further to a place with two small hills.  This is one of the locations of a really old village that has mostly melted into the tundra.

This was wonderful because it had lots of Sour Dock.  Before the teacher spoke on the area, everyone picked raspberries and sour dock.  It was a really hot, hot, day and everyone enjoyed sitting and listening.


Soon after, we headed back to the camping site so we could fix the sour dock for dinner.

I had a blast and came back with racoon eyes due to having my sunglasses on.  As soon as my microSD card reader arrives, I'll download pictures so I can share some dancing pictures with you.  Have a good day.

Posted by Lee MacArthur at 8:48 AM