Making Their Own Entertainment. 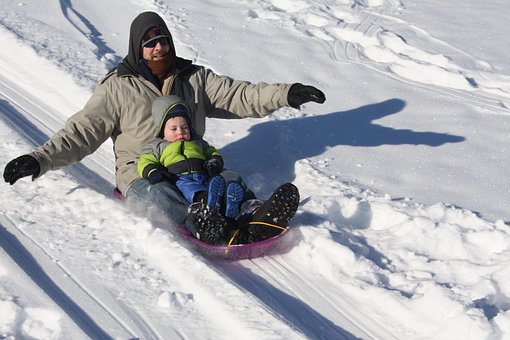 All the snow we got last month melted slowly over a two week period.  The lake thawed and the river stayed open enough for people to go out boating and fishing.  In fact, there was enough moisture that came down to turn the ground into a muddy, sloggy, mess.

About a week ago, the temperatures dropped and the mud froze enough to walk on without getting stuck.  Then it hit.  It rained and the temperature dropped so the water became a layer of glare ice on the roads, the boardwalks, even the ground.

Going anywhere in the village was taking your life in your hands.  People who took out their four wheelers (ATV) complained that they slid off the roads due to the smoothness of the ice.  It was just too dangerous to venture out.  I only went from home to work and back again.

Tuesday was just a bit better in that a small layer of snow fell over the ice so it was just a bit safer but still treacherous.  Several of us managed to borrow one of the school vehicles to go to the post office.  I wish I'd brought my camera for the trip but I didn't even have my cell phone so all I can do is describe my view.

All the roads in town are gravel covered dirt that may or may not survive all the four wheelers using it when wet.  However, on the Tuesday in question, the road was a sheet of flare ice which slowed down traffic and opened up play possibilities for children.

As we parked by the Post Office, we saw two children, each on a small sled, coming down the iced over board walk from the Catholic Church, past the head start building, down to the bottom of the hill before using a hand to cause the sleds to make a sharp right turn on the road so they continued along the road before friction slowed them down by the old head start building.  Last seen, the two children were heading back up the hill to make another run.

On the road back to school, after a brief stop at the store for some last minute Thanksgiving supplies, we had to slow down because three young ladies used the breeze to push them along the iced road.  The smooth ice allowed them to slide along with little resistance.  Occasionally they fell but not at the same time.  Our driver had so watch them carefully as she maneuvered her way through the group.

After passing the girls, we had a wonderful view of several students out on the partially frozen ice.  They had fun opening their coats to capture the wind and used it to move them across the lake.  A few managed to go quite a distance before falling over.

The one thing I noticed for all the children out on the ice, is that they were persistent.  Every time they fell, they got up and continued on their merry way.  It was wonderful.  I wish I had the fearlessness to do something like that but I've reached an age where I know what could happen if I fell wrong so I refuse to take a chance.  On the other hand, I can laugh with them and enjoy their trips.

Let me know what you think.  Oh and we now have enough snow on the ground to cover the ice but its the powder snow so I'm still wearing my ice cleats when I go out.  Have a great day.

Email ThisBlogThis!Share to TwitterShare to FacebookShare to Pinterest
Labels: Fun on ice