The History of Tanning. 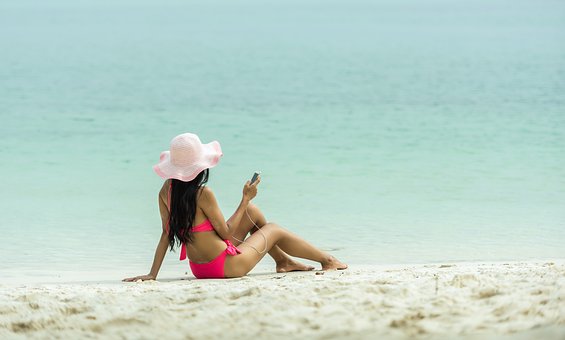 It's only been in recent history that the tanned look has become both acceptable and popular.  In the past, high class women worked hard to keep a pale skin because having tanned skin meant you were of a much lower class.

Up until the early 1900's the wealthier women protected their skin with parasols, hats, and and gloves.  In 1903, a physician recommended people be exposed to sunlight to treat rickets and tuberculosis. He won a Nobel prize for this therapy and it opened peoples minds to enjoying the sun for health purposes.

However, the idea of getting a tan did not really have much popularity until women's clothing became less restrictive and shorter.  Apparently, french beach resorts began staying open during summers in 1923 which allowed the wealthy to sunbath and glow.  It is said that when Coco Chanel sunburned that same year, she began a movement where more people went sunbathing.

By 1929, this movement created the rise in the production of bathing suits with new styles, cosmetics and clothing all designed so showoff one's beautiful tan. The first tanning oil was released in 1928, followed by a UV filtering tanning oil in 1935.  The Coppertone sunblock was invented and released in the 1940's but did not become popular until a campaign in the 1950's.

In addition, the creation of the bikini opened up more skin to be tanned and the dark hued tan became acceptable due to Ursula Andress's appearance in the James Bond Movies in 1962.  Even the Barbie doll joined the sun kissed skin look with the release of the Malibu Barbie in 1971. She had bleached blonde hair and a dark tanned skin.  By 1978, the first tanning bed made its appearance in the United States.

Did you know, sunless tanning lotions have been around since 1929 but the original ones were nothing more than a body make up.  In the 1950's a medical researcher discovered a compound which stained patients skin but not their clothing.  This compound because an ingredient in all those quick tanning lotions that gave a tan without sitting in the sun.

Unfortunately, even now, most people want a tan to appear healthy and happy but in exposing themselves to the sun, they are exposing themselves to potential issues including skin that looks aged and appears like a road map.  I think I was about 20 when I realized the term "tanning" also meant treating an animals skin and that is what we try to do to our skin when we go out in the sun without protection.

Let me know what you think.  I'd love to hear.  Have a great weekend.
Posted by Lee MacArthur at 4:00 AM

Email ThisBlogThis!Share to TwitterShare to FacebookShare to Pinterest
Labels: Tanning