When Did Turkey Become A Part of Christmas? 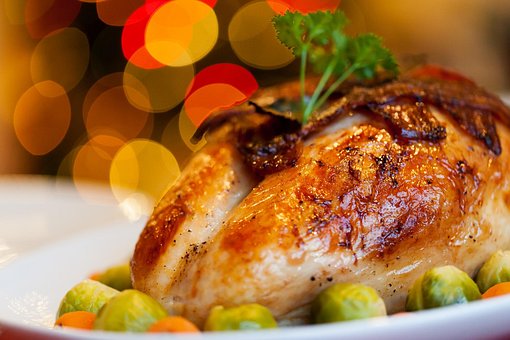 We just finished Thanksgiving, complete with turkey and all its trimmings.  I know why I have turkey at Thanksgiving since it has to do with pilgrims and what was available but what about Christmas.  When did it become popular to eat turkey for Christmas dinner.

It actually become popular at Christmas time, much earlier than I would have guessed. I've come across two different stories on how the turkey came to Europe.

One story says a trader, William Strickland, brought several turkeys with him to England when he returned  from the New World in 1526 while another states the Spanish brought turkey's from the New World.  The use of turkeys or "Indian Chicken" spread across Europe.  There is a cookbook from Frankfort in 1581 with 20 recipes that use this bird.

Although King Henry the Eighth introduced the idea of having turkey on Christmas day, it was not until the 20th century when King Edward VII make it popular that it over took the traditional goose in England.  In America, its a different story.

Turkey's born in the spring could eat enough bugs and other things to grow to a size large enough to feed a family and as stated earlier they could be slaughtered without loosing money.  In addition, they were cheaper than geese or chickens and thus were more economical.

It is thought the traditional Christmas dinner of turkey with gravy and stuffing, and plum pudding became more popular when Charles Dickens published A Christmas Carol in 1843. When Scrooge gave the turkey to the Cratchit family, it cemented having turkey at Christmas for the middle and upper classes.  This story was quite popular in both the United Kingdom and in America.

By the beginning of the 20th century, the wealthy always planned to have either game or beef because turkey became associated with the poor since they often received turkey's from various charities.


When I was growing up my parents would buy the biggest turkey they could afford for Thanksgiving and then a second one for Christmas.  We lived off of the left overs for probably 6 weeks because my mother would use it all including the bones, skin, etc to make soup.  Turkey noodle soup was the last thing on the list.

We had turkey for the big meal, then left overs in the form of hot turkey sandwiches followed by a turkey shepherds pie (great use for the left over mashed potatoes),  mashed candied yams with mashed potatoes for part of a meal, and finally soup made with the neck, bones, skin, giblets, and anything else she could use.

I suspect everyone has their own traditions like this.  Let me know what you think.  Have a great day.
Posted by Lee MacArthur at 4:00 AM

Email ThisBlogThis!Share to TwitterShare to FacebookShare to Pinterest
Labels: Turkey and Christmas?