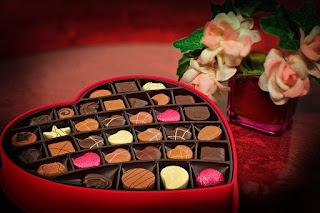 When we talk about chocolate, we automatically think of dark, milk, or white in their various forms.  Just the other day,  I was watching one of these competition baking shows where they are given special ingredients or a theme to create cup cakes, cakes, and other such delights.  On one episode, they told the contestants, they had to create something with either blonde or ruby chocolate.  My eye brows went up because I've only ever heard of blonde brownies, not blonde chocolate, so I had to find out more about both.
Blonde chocolate is where they caramelize white chocolate to give it a color resembling caramel.  This process gives the chocolate a fuller, toastier flavor than the white chocolate and is the basis of several commercial chocolate bars.  The general process consists of taking chips of white chocolate made out of cocoa beans, sugar, and milk solids and roasting them between 200 and 275 degrees F until they turn to a nice milky coffee color between 30 and 60 minutes.   The chips have to be stirred constantly until done or they might burn.  Once it's been melted and tempered, it can be turned back into a solid.  Once it's in solid form, it can be used like any other chocolate.
Blonde chocolate is the first type of chocolate added since 1930 when white chocolate made it's appearance.  Blonde chocolate was discovered in 2006 and rapidly became an industry secret but it didn't stay that way.  It made it's way out into the world in 2012 as a variety of chocolate sold in the candy aisles.    In addition, Starbucks has added this flavor to it's list of drinks.  Valrhona is the company who discovered blonde chocolate and they are the first to have marketed it to the general public.
Blonde chocolate is a nice alternative to white chocolate.  Although white chocolate is not seen as a real chocolate, it has been classified as such since 2002.  Chefs like the blonde chocolate because it is less sweet than the white with more depth.  When the chocolate is held at low temperatures, the proteins and lactose brown and create new flavors that had not been there before.
On the other hand, Ruby chocolate is a new variety of chocolate that is a lovely pink and made from the Ruby Cocoa Bean.  It made it's appearance at the Shanghai trade show in 2017.  These are not newly discovered cocoa beans but refer to the beans that are combined to make the pink color and the product is patented.  Ruby Chocolate is being called the fourth chocolate after Milk, Dark, and White.
It appears that Ruby chocolate is made up of beans from Ecuador,  Brazil, and the Ivory Coast.  They look for a certain mix of compounds, probably pigmented polyphenols, that when processed using a specific technique, it produces a pink chocolate.  The patent states that the process decreases fermentation to 3 days or less then treating it with an acid and then using a petroleum ether to take out fatty acids thus keeping the color.  According to one article I read, cocoa beans grow in a purple pod and when first picked they have a purple tint.  By shortening the fermentation period, the beans retain some of their color.
The Ruby chocolate is described as being quite sweet like a white chocolate with a raspberry or fruity flavor associated with it.  Some people have described the flavor as tangy.  There is a catch with Ruby chocolate in that the United States government does not recognize it as chocolate because it does not have the correct percentages of the correct ingredients.  The amount of unsweetened chocolate puts it between white chocolate and milk chocolate so it's neither.
So now you know more about Blonde and Ruby chocolates.  I know when I watched the cooking show, I had heard of either.  Let me know what you think, I'd love to hear, have a great day.
Posted by Lee MacArthur at 5:00 AM

Email ThisBlogThis!Share to TwitterShare to FacebookShare to Pinterest
Labels: Blonde or Ruby