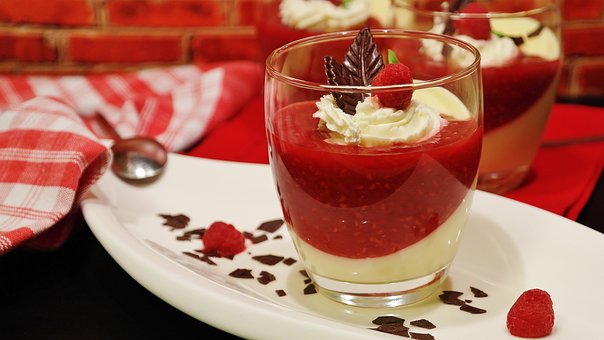 Growing up, the only pudding we had in the house was the instant stuff.  You know, the kind you mixed with milk, poured it in bowls, and let it set in the fridge.  I'd never heard of the kind you cooked over the heat before pouring in bowls and chilling.  That was like wow to me.  Then I visited some relatives who served a plum pudding and it was almost like a cake.  To me that was not a pudding because it wasn't what I was used to.

The type of pudding we have in the United States is actually closer to a custard while the puddings started out as meat based things closer to sausages.  By the 17th century, puddings were either meat based savory ones or a sweet flour based product but both were cooked in a special pudding bag by being boiled.  If you remember the nursery rhyme "Pease porridge hot, pease porridge cold...." refers to a boiled pudding made out of pease flour.  Pease flour is made out of ground yellow field peas.

By the second half of the 18th century, puddings no longer contained meat but were still boiled and in  the 19th century, puddings were more like the cake and evolve into the steamed puddings made today such as Christmas puddings or Spotted Dick.  Although the Romans recognized the binding properties of eggs, it wasn't until the Middle Ages that the sweet thick concoction that resembles the American version of pudding developed.  At this time, the custard could be eaten alone or used as a filling in pies, etc. In addition, custards such as flans could be found all around Europe and Asia in various forms.

It was in the 1840's that the differences between English and American puddings became fuzzier because the British chemist Alfred Bird created a custard powder based on cornstarch that could be used as an alternative to eggs because his wife was allergic to eggs. Soon the Americans used custard powders and other thickeners to make custard like desserts.  In addition, the custard powders became quite popular on the Oregon Trail and the westward movement because eggs were scarce.

The first custard pudding marketed by My-T-Fine in the United States hit the stores in 1918 but it still required cooking to thicken.  The first flavor to be marketed was chocolate followed soon by vanilla.  Jello released the first instant pudding in 1936 and it was also chocolate.  About nine prior, they'd tried a chocolate jello that didn't do well so it was discontinued but over time they refined and researched until they had it in the form of an instant pudding.

This new instant pudding became such a success, Jello soon released other flavors such as vanilla, rice pudding, tapioca, coconut, pistachio, butterscotch, egg custard, and flan. Unfortunately, Jello underwent a decrease of sales so in 1971, they introduced packaged prepared puddings in packs of small cups that made it easy to provide snacks for the kids.

So if you ask for pudding in the United States you are most likely to get a smooth, tasty concoction similar to a custard but in Britain, it might be steamed, boiled, or similar to a custard.  I'll address bread, rice, or tapioca puddings another time.  Let me know what you think, I'd love to hear.

Email ThisBlogThis!Share to TwitterShare to FacebookShare to Pinterest
Labels: Pudding or Custard?