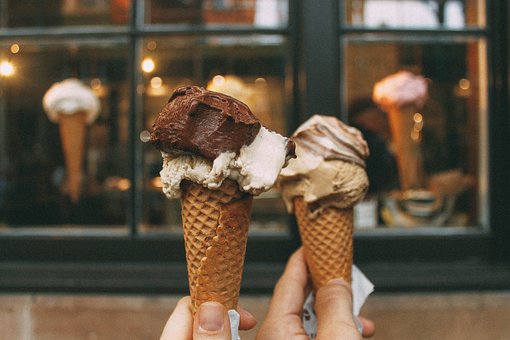 I love ice cream, especially on a nice hot day.  I tend to like anything with chocolate but I've got siblings who think I'm crazy to enjoy ice cream when it's cold out. I have it at home for dessert when its -40 outside.

I know the cone is a fairly recent development but I have no idea when ice cream was eaten.  The first record of anything similar to ice cream appears in 200 B.C but the

It turns out that the Chinese had something similar to ice cream as early as 650 A.D.  The emperor made the concoction out of Buffalo milk, flour, and camphor.  There are also records that show Alexander the Great loved snow mixed with honey and nectar while the Roman emperor Nero Claudius Caeser loved his snow mixed with various fruits and juices.

It took another thousand years till Marco Polo  returned from his long journey to bring back something similar to Sorbet. Over the next few decades, this wonderful creation spread across Europe and evolved until it became ice cream around the 16th century.  According to historians, England developed ice cream at about the same time or slightly before the Italians. The food "Cream Ice" was often eaten by King Charles I during the 17th century.

On the other hand, Catherine de Medici introduced France to this frozen dessert in 1553 when she married King Henry II of France.  Ice cream remained something only the wealthy could afford until 1660 when the public was allowed to enjoy it.  A Sicilian sold a mixture of milk, cream, butter, and eggs to the public at his cafe in Paris.

Ice cream made it's way across the Atlantic to America sometime in the late 17th or early 18th century because there is a reference to ice cream being served at a dinner in Maryland around 1744.  About thirty  years later, the first advertisement for ice cream appeared in the New York Gazette declaring it was available almost every day.

Our first president loved it.  One of the businesses in New York City shows that the presidency purchased around $200 worth of ice cream during the summer of 1790. In addition, once George Washington died, two brass ice cream pots were found at Mount Vernon.  Furthermore, Thomas Jefferson loved ice cream and particularly enjoyed a dessert that took 18 steps to make and resembled Baked Alaska.

Up until 1800, ice cream could only be enjoyed by the elite because it had to be made on the spot and eaten due to a lack of refrigeration. Around 1800, insulated ice cream houses made an appearance so ice cream could be made and last longer. Then in 1843, Nancy M. Johnson of Philadelphia managed to patten the modern crank machine.  Before then, most people made ice cream by placing the ingredients in a metal bowl that sat in another bowl filled with ice cream and salt.  The liquid was stirred until it turned into ice cream.  This new machine made the ice cream making process easier.  In 1851, a Baltimore milk dealer began manufacturing commercial ice cream using the extra cream he had and as new technologies appeared, the production of ice cream increased and once motorized vehicles were invented, ice cream could more easily be distributed around the country.

This also lead to new ice cream based dishes for the public to enjoy.  In 1874, the first soda fountain opened leading to the new profession of soda jerk who fixed the ice cream soda.  Then in 1890, after religious institutions complained about the sinfulness of eating ice cream sodas on Sunday, someone created an ice cream sundae that has no carbonated soda.  Originally, it was named the "Sunday" but the spelling was eventually changed to "sundae" to eliminate the religious connotations.  The first patent for ice cream cones was granted in 1903.

The next major improvement in technology came in 1926 with the invention of electrical freezers to provide continuous refrigeration.  This lead to manufacturers being able to produce ice cream in larger quantities and stores began selling ice cream regularly in the 1930's.

Then during World War II, ice cream was the morale booster for the troops and each branch tried to outdo the other.  By 1945, the "first floating ice cream parlor" was built to service the sailers in the Western Pacific.  When the war finally ended and the rations on dairy disappeared, Americans were able to celebrate victory.  In 1946, Americans consumed an average of 20 quarts of ice cream per person.

Since then, ice cream consumption has increased as grocery stores made it easier to get and then artisan makers appeared on the scene.  I love some of the artisan flavors at our local store.  I love the ginger showers flavor which is vanilla ice cream with chunks of candied ginger and chocolate sprinkles.  Let me know what you think, I'd love to hear.  Have a great day.

Email ThisBlogThis!Share to TwitterShare to FacebookShare to Pinterest
Labels: History of ice cream