Where In The World Are These Crazy Ice Cream Flavors? 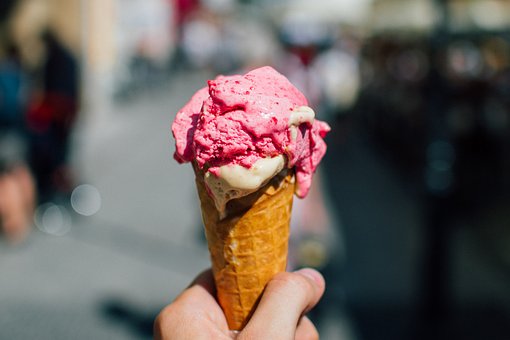 I know my local artisan ice cream place has had some unusual flavors such as asparagus - I wasn't willing to try that - but I've seen nothing quite as unusual as some I've seen in places like Japan.

Japan is noted for some of it's way out there flavors.  The Ice Cream City in Namco Namja Town in Tokyo. Namco Namja Town is part of an indoor amusement park and has quite a few odd flavors of ice cream.  It is noted for its 50 varieties of ice cream that include Raw Horse Flesh flavored ice cream.  It also has other flavors such as Eel, Wasabi, Cow Tongue, Octopus, Squid, Crab, and Yakisoba.  They even have a Pearl ice cream with pearls embedded in the mixture and people hope to find one every time they buy a cone.

If you head over to Maine, you can get a couple of scoops of Lobster ice cream.  Then there is a company in New York City that is noted for being creative with ice cream flavors including Fois Gras which is a goose liver pate.  On the other hand, a different place in New York offers a Fig and Brown Turkey flavor to tease taste buds.  Like something hot?  A shop in Delaware offers two different ice creams with hot peppers in them.  Once mixture uses Ghost peppers which are classified as the hottest pepper in the world or about 400 times hotter than tabasco.

On the other hand, if you head over to England, you can get yourself some mushy peas and fish which is actually one scoop of minty mushy peas and one scoop of fish flavored ice cream topped with fried cod and served with French fries.  You could try jelly fish ice cream which is made with jelly fish proteins and glows as you lick it but it goes for over $200 a scoop.  Head back to Japan for a Mamushi snake ice cream which is made out of one of the most poisonous snakes in Japan.  If you pop back to San Francisco, you can find an ice cream with mint and meringue of sea urchins mixed with espelette peppers.

There is an ice cream place in Venezuela who makes something like 900 different flavors such as sardines in brandy, beef, spaghetti and cheese, cheeseburger and a flavor based on a local dish with beef, rice, plantain, cheese, and black beans.  Talking about traditional dishes, Scotland has a place that offers a Haggis ice cream. In Sweden, you can find a black ice cream that is salty and licorice flavor.  If you are in the Philippines you can get a Crocodile egg ice cream made with crocodile eggs. The owner of the shops says these eggs have less cholesterol and is a healthier choice.

Now for flavors that are not quite as weird but odd enough.  In New Orleans, you can find a Creamery that offers a Cajun Tomato flavor which actually sounds more like a salad dish than an ice cream.  In New York City, you can find a Cheetos flavor that is a bright orange, just like the original food.  Then there is the Burbon and Cornflake flavor from a place in San Francisco.  This is classified as a breakfast dish since it's got cornflakes in it.   On the other hand, check out the Whiskey and Prune ice cream that can be found in Australia.  The prunes have been soaked in whiskey before being added to the ice cream base.

You could enjoy a Chocolate Banana ice cream spiced with curry in Chicago or try a scoop of the Lemongrass with Salted Black Licorice and Olive ice cream.  All unique flavors, some are appealing while others are quite out there.  Let me know what you think, I'd love to hear.  Have a great day.
Posted by Lee MacArthur at 4:00 AM

Email ThisBlogThis!Share to TwitterShare to FacebookShare to Pinterest
Labels: Where in the world are these ice cream flavors?