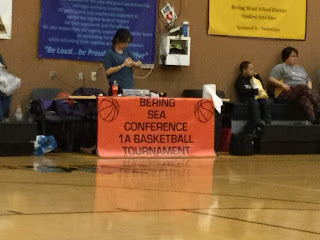 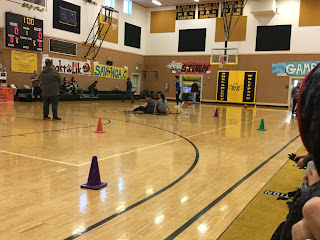 In the rural part of Alaska, we don't have marching bands.  We don't usually have cheerleaders at this time of the year because most play basketball.  We do have half time entertainment but not the usual marching band or band music.  Let me explain the local event and then I'll explain in more detail about halftime.

For the last week, my school has hosted the 1A regional basketball tournament to determine which schools would be heading to state to play against others across the state.

There were over 250 students and coaches staying in just about every room in the school. Furthermore, family members came in and stayed with friends, family, and with anyone they could. so they could watch their children play.

Games ran from 9 am to 11 or midnight every day beginning last Monday.  I know how long the games went because I kept books for many of the evening games.

Saturday, they changed things up.  In the morning, there was some sort of clinic so the participants could refine their skills.  In the evening they had a boys and girls competition showing how well they could handle the ball, dribble, sink the ball in a lay-up, elbow, and free throw positions.

I don't know who won because I didn't stay to the end of the night.  I was tired but I did stay long enough  for the half time show.  The half time entertainment show, happened every night during all the evening games. 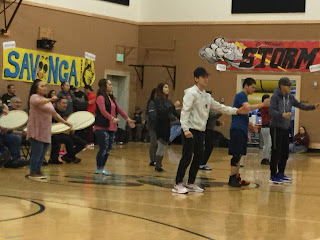 When the buzzer rings and the teams head off for their half time meetings, men swarm down from the stands, grab chairs, drums, and sticks.  They form a line toward the back of the floor.

You can see some in the picture to the left, towards the back.  They begin playing the drums while singing in the local language which might be Inupiaq, or Yupik.

Students came down from the stands to begin dancing.  It began with a few, and then more and more joined until there were a bunch of people on the floor. 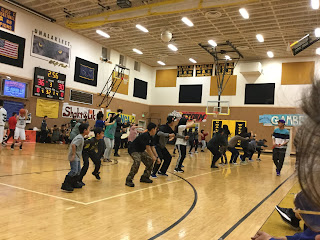 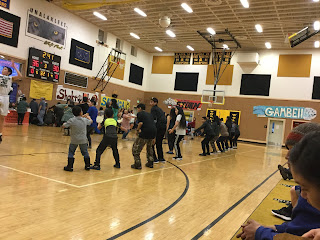 The girls always dance behind and are more sedate, even during the second time through when the men sing louder and drum harder.  The boys are in the front, with their stronger movements, and they are likely to move, squat, and become quite involved in the story being told by the dance.

Every dance tells a story.  Some songs tell about hunting, or berry picking, or basketball, or taking care of children.  I've even done one about chewing tobacco.

Yes, having dances are quite traditional to the point that many villages host dance festivals in the spring.  Bethel, Alaska hosts one of the largest festivals with dancers coming from all over Alaska and sometimes from other parts of the world.

This is part of the life in rural Alaska.  I'll be sharing information and a couple pictures on the Serum run which is not the Iditarod itself but a replication of the run that inspired the Iditarod.  I hope you have a great day.  Check back on Wednesday for the more on the Serum run and Friday I'll be sharing some photos of the annual ice festival held in Fairbanks.  Let me know what you think, I'd love to hear.
Posted by Lee MacArthur at 4:00 AM

Email ThisBlogThis!Share to TwitterShare to FacebookShare to Pinterest
Labels: Just dancing., No bands