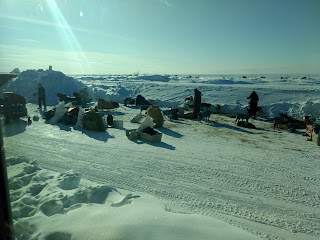 The Serum Run is a recreation of the original serum run carried out in 1925.  It was this run that inspired the world renown Iditarod race.

In case you didn't know, the serum run happened when diphtheria spread throughout Nome out on the Bering Sea back in 1925.  Although there was plane service, authorities were not sure planes were reliable.  Instead, they relied on 20 teams of dog sleds to carry the anti-toxin from Nenana, near Fairbanks, to Nome. 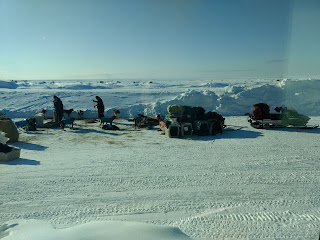 It took them six days to cover the 674 miles of countryside in one of the worst winters on record.  Nome needed the serum or over 100 percent of the population could die from it.

The dog-sleds used the same route the United States Postal Service used to transport mail with their dog-sleds but it usually took them 25 days to complete the run.  The 20 teams spread themselves out along the route because the serum had to be there in no more than six days or it would loose its efficacy.

The serum left Nenana and they went through extreme cold, blizzards, snow, and horrible weather to get the serum there.  The driver on the second to last leg made a calculated risk to go across the unstable ice on the Norton sound.  By doing this he cut time off the trip so he could hand off the serum to the final driver who got it to Nome about a half day before it expired.

To commemorate the 95th anniversary of the original run, a bunch of people decided to run the whole train from Nenana to Nome.  The teams left Nenana on February 22, 2020, planning to cover 30 to 50 miles each day.  They hope to arrive in Nome on March 10th and so far it looks like they are on track.

This group is not traveling straight through.  They stop off and spend the night in various villages so they can conduct clinics to vaccinate dogs, show a mushing movie, or hanging signs and doing trail work.  They arrived in our village this past Friday night, showed the video, and got to spend the night in the teachers lounge because that was the only room available.

I didn't know they were there until I walked in to retrieve my coat, (my room was filled with students so I couldn't go in there) and there they were.  I wasn't the only one who wandered in but they hadn't settled down for the night.  The next day, I stopped in and took a couple of pictures of a few of the dogs parked behind the school.

In addition to the mushers and their sled-teams, there were quite a few snow machines to provide support.  One person had already been hurt when a snow machine ran into her on the trail.  She ended up with a broken leg and couldn't finish the run.  Someone got her dogs into Nome where she is from. Many of the people involved have done the Iditarod while another is using this run as part of his thesis for his Master's. Along the way, they've talked to decedents of the men who made the original run.

It is said the 1925 event inspired the Iditarod which allows dog-sled teams to run from Anchorage to Nome in late February or early March.  The people behind the Iditarod began to push for this race as a way to preserve trails in the bush of Alaska and to preserve dog-sledding because people were switching to snow machines and snow machines are not as reliable as dogs.

Officially, the Iditarod began this past Saturday at 10 AM.  One mushers had to withdraw due to health issues so her husband replaced here and hopefully, the mushers will hit here in another week or so.  I plan to take pictures and share them with you once the mushers have gotten here.  So let me know what you think, I'd love to hear.  Have a great day.

Email ThisBlogThis!Share to TwitterShare to FacebookShare to Pinterest
Labels: The serum run 2020