The Why's And Wherefores Of False Eyelashes. 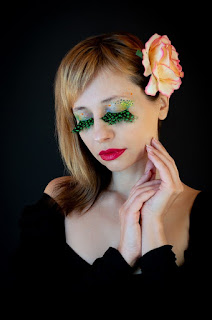 The thing about wearing false eyelashes is that people notice them.  They stand out and attract peoples eyes to your lashes.  They just make the eyes pop.  I also realize that many of us do not have the time to spend applying false eyelashes because we'd rather sleep in for a few extra minutes.  Today, I thought I'd look at the different types of lashes, when each is appropriate and other such information.

I admit that I usually wear mascara rather than mess with false eyelashes unless I'm performing or need them for something special and I am not great at putting them on but I also know that advances have been made so some are a lot easier to use.

When looking at false eyelashes, there are three types, individual lashes, magnetic lashes, or strip eyelashes and making a choice can be confusing.  The strip eyelashes are also known as the traditional false eyelash.  They are the one used most often by people and are the same ones that most of us struggle to apply in the beginning.

As far as individual lashes, there are two types.  The first are made up of one or two curved lash hairs that are applied by an eyelash technician.  The other are clusters individual lash that one applies using the same type of technique as strip eyelashes and give you a more customizable look.  There are also two types of magnetic lashes.  The first one is applied using a strip with magnetic beads secured to your eyelash with magnetic adhesive.  The other type are lashes secured around your other lashes via magnets on a band.

So when is the best time to use which is the next question. The bottom line is usually choosing the one that you find easiest to use.  Many find the magnetic lashes easiest to use because the magnets make it pretty foolproof to apply them.  People who want to create their own custom look and are more experienced find it more appropriate to use individual lash clusters to get the desired results.  The single individual lashes are better for people who are missing a few lashes here and there so the thin areas are filled in and the lashes look better.

Finally, strip lashes are the time honored way to use lashes and can be used in a multitude of situations.  Although the strip lashes can be more difficult to apply, several makeup companies have created adhesive liners which make it easier to apply the glue for your strip lashes.  In addition, if you prefer to use a clear adhesive or glue, you will want to stay with strip lashes because magnet lash connectors only come in black.

Now, if you've ever wondered if you can reuse your false eyelashes.  The answer is that  you can reuse them if you can properly clean them but individual lashes are only made to be used once. For strip lashes, they need to be cleaned with soap, water, and 70 percent alcohol.  On the other hand, magnetic lashes are the easiest to clean.

If on the other hand, you want lashes that don't have to be taken care of for a few weeks, you might look at using lash extensions.  Lash extensions can run between $150 and $300 for something that lasts three to four weeks if done by a lash technician.  If you prefer to do them yourself, then use the clusters since they workout to be about the same cost as strip lashes or you can cut up the strip lashes into smaller segments but you need to be really experienced.

One thing to keep in mind is that if you use strip lashes, do not just rip them off because you can damage your lids.  Consider using a cleansing balm to help soften the glue while beginning the cleaning process.  After massaging in the balm and the glue has softened, gently peel the lashes off. Once the lashes are removed, then clean them and focus on your natural eyelashes.  Clean any remnants of mascara off the lashes, apply a nice serum to protect your lashes, and complete with a hydrating eye creme on both the top and bottom of your eyes.

Monday, I'll talk about cleaning flash eyelashes so they can be reused.  Let me know what you think, I'd love to hear.  Have a great day.