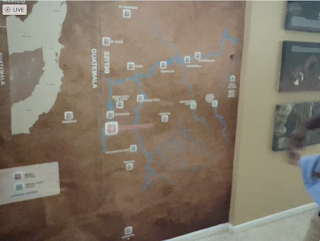 It turns out Belize is home to so many different Mayan ruins and Mayan caves that one could spend several weeks just exploring them.  I got the opportunity to check out two ruins.  The first I wrote about Friday and last Thursday, I got a chance to tour Xunantunich, a Mayan ruin, located near the Guatemalan boarder.  It is so much bigger than the last one I spoke about.

The photo to the left shows all the different places that house Mayan ruins and caves.  They are almost in a strip heading towards Guatemala from Belize City.  The one to the furthest left is in Guatemala. 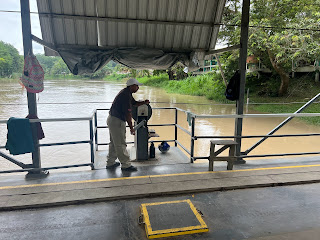 Normally, the tour vehicle crosses the river on a ferry and then it drives about 1.5 miles up the road to the parking lot.  From there, everyone is required to walk the rest of the way but due to a river that was higher than normal so the vehicles couldn't get on the ferry since it was about 6 inches above ground.

To get the ferry across, a worker turns the hand crank and you go across the river.  When you reach the other side, you disembark and head up the road.  We were lucky in that there was a sprinkle of rain that lasted a short bit but the day never really got super sunny till after we were done.  They did tell us that if the level of the river went up, they would call us and we'd have to leave.  The river stayed the same level the whole time we were there. 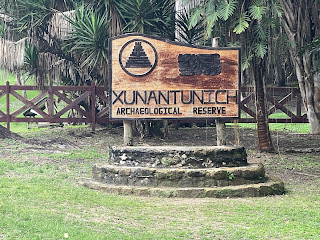 After a nice walk up the road, we finally reached the sign telling us, we'd reached our destination.  It is at this point, you head into the reserve which has a very nice visitors center.  Xunantunich is also known as the stone lady. The story goes that a young man was up at the ruins and saw a beautiful mayan young lady next to the temple.  He followed her into the temple but she disappeared.  He called others to help find her, yet the could not find her again.  That is the short version of the story.  Who knows if he saw her?
Once past the visitors center, you finally reach the ruins themselves.  It is so big with two ball courts, a huge temple, and lots of other buildings. 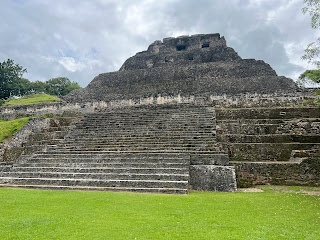 This is the temple. It is 137 feet tall from the plaza which is the grassy area in front of it.  The place is here everyone met to listen to the rulers but there is a small area behind the temple that you cannot see from here where the rulers and upper classes would have their own private celebrations.
To climb up to the top, you start climbing the stairs and follow it up to the white band you see.  From there you veer off to the left side and take more stairs up and around to the back where you finish your hike.  The view was fantastic from the top.  I could see a village over in Guatemala, and one located behind the temple. 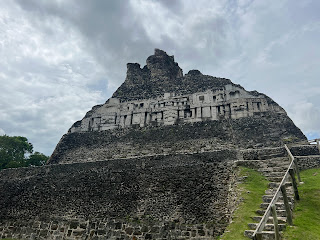 On the west side is a frieze that runs all the way across the temple.  As you can see, there are steps going up to a level area and above the level area is the frieze.  If you turn right at this level, you can walk across the front and then go down but if you turn left, you follow the path around back and then continue your climb up to the top where you come in from the back.
The nice thing about the climb is that there is a nice flat green area with other small buildings.  There you get a nice rest before you start climbing again.  This made it so much nicer when climbing. 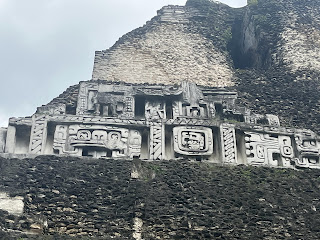 There is another frieze on the east side of the building you can see when you are going down.  This one I was able to get a closer up shot but the frieze didn't go all the way across like the one on the west.
Not all the buildings in the ruins have been excavated.  Many of the buildings are slowly being dug out as time allows and some may never be touched.
The guide told us that the Mayans from the place in Guatemala, came and took over the temple so the residents of this place, fell back and build more facilities until they could kick the invaders out.  I'm not sure they ever managed it but it explains the way the village grew. 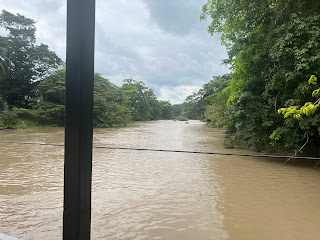 Once we were done with viewing the ruins, we walked back down the road before taking the ferry back across to the main road.  The river was definitely up as you can see from the photo.
The ferry boat captain asked about ages and did we climb all the way to the top.  I was proud of making it all the way up and I was able to look out and take photos.  I have a fear of heights but I've learned as long as I am not too close to the edge, I can handle the heights so it was good.
After we left the ruins, we stopped in the closest town for lunch.  Rather than going to a restaurant, we stopped by the market place to buy some Pupusas which are a thick corn tortilla thing stuffed with beans and cheese with a Cole slaw on top, and finished with a tomato sauce.  It was sooooo good. 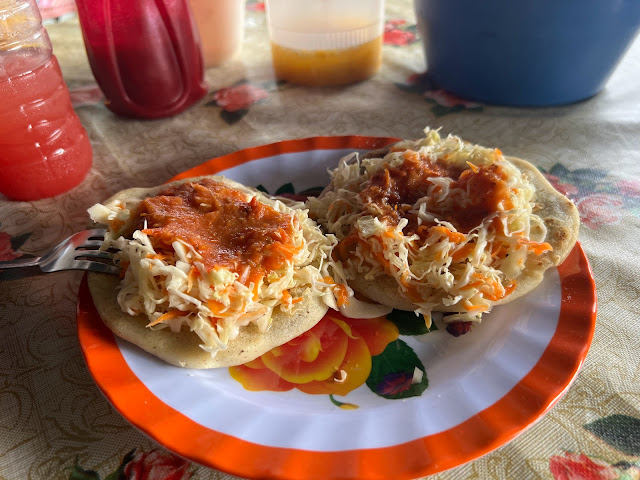 All three tours were awesome and our guide, Albert, of A Plus Adventures Belize was fantastic and made me wish I was staying longer so I could see more.  I'm just going to have to come back.  Let me know what you think, I'd love to hear.  Have a great day.
Posted by Lee MacArthur at 5:00 AM

Email ThisBlogThis!Share to TwitterShare to FacebookShare to Pinterest
Labels: Xunantunich