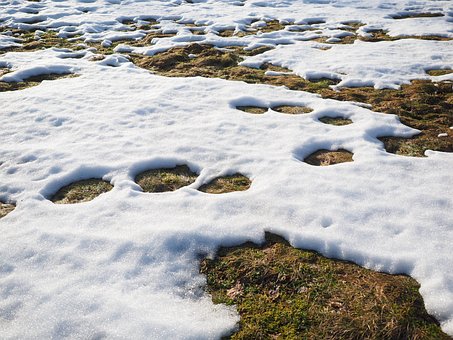 Spring is definitely coming to this part of Alaska.  There is still a fair bit of snow on the ground but we are seeing patches of dirt peeking through.

We seldom see flowers peeking up through the snow.  When we see flowers, its usually outside of town on the tundra when the berries bloom in preparation for producing fruit.

Most of the ground in town is either dirt, well mud once the snow melts or brown grass which went dormant over the winter.

Although it takes several weeks for the whole process to happen, it feels as if its almost over night.  I think that is because the sun rises around 7 AM and sets around 11 PM right now and we are so busy enjoying the longer warmer days that we don't pay as much attention as we should.

Yesterday, I noticed the area around the airport runway showed more dirt than snow. The airport runway is elevated so when the wind blows, the snow is blown away from it.  In addition, the runway is usually plowed whenever there is a snow fall.

In fact, we have not gotten as much snow as in the past. When I first moved here, we usually got enough snow that it was up to the top of the handrail of my porch.  The past year or so, its never gotten that tall.  I remember one year where we had so much snow, people had to dig entry ways through the snow to their saunas.

There was one year, we had blizzard after blizzard hit the village.  One of the guys headed home and had problems finding his house.  He realized he was on top of a neighbors house.  Apparently,  he climbed up the snow bank to the top of the apartment without knowing it.

On my way around town, I noticed the snow had changed from light, fluffy, which glistened as if filled with diamonds to the crystalline chunky stuff, neither of which is good for snow balls. I suspect the snow is just going to melt and be gone by May first.

Will I miss the snow?  Sort of.  When the snow goes, the lake will thaw changing into water and the shortcut to the post office disappears.  I'll have to go all the way around.  I'll no longer be able to use my sled when I have to pick up boxes at the post office or at the airlines place.  I won't even be able to cut straight across.  I will miss the snow, when I have to clump through the oily, sticky, mud.

I will not miss it because I prefer the warmer temperatures and the longer days.  I like the warmer part of the year.  It is spring out and I'm glad.

Let me know what you think.
Posted by Lee MacArthur at 4:00 AM

Email ThisBlogThis!Share to TwitterShare to FacebookShare to Pinterest
Labels: Spring.