The 10 Most Expensive Pens in The World! 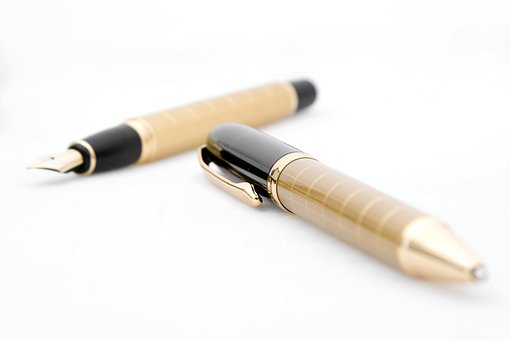 I usually go hunting for working pens because people take the good ones and leave behind the ones that don't work.  It seems everyone knows the ones by the phone always work.  They do but only after I sort through them looking for one I can take messages with.

I realize we have modern devices to take notes but I still love writing with a pen even though my handwriting resembles a scribble.

Before I discuss the top ten pens, I'll let you know the most expensive piece of paper in the world sells for just under $14,000 a sheet.  Its sold by a company in Germany.  The reason for its high cost is the paper was made in the 14th century and it comes fully authenticated.  So if you purchased this, you'd need an equally exquisite pen to write on it.

These pens are in no particular order.
1. The Gotica Pen by Caran d'Ache.  This pen was designed to celebrate Gothic art and architecture.  Its 6 rhodium coated solid silver sides are decorated with fleur de lis and rosettes.  In addition you'll find it encrusted with 892 diamonds, 72 emeralds, and 72 rubies.  This pen goes for around $405,000.

2. The Heaven Gold Pen by Anita Tan was designed for women using the idea of the constantly changing alignment of planets for inspiration. It contains 161 colored diamonds circling a 2 billion year old 43 carat Tsvorate gemstone.  You get all this for just over $995,000.

3. Check out the Mystery Masterpiece by Montblanc and others. It took 1.5 years to make with 30 carats of encrusted gems of your choice: rubies, sapphires or emeralds.  In addition, it has 800 diamond accents.  Unfortunately only 3 have ever been made due to the $730,000 price tag.

4. Diamante by Aurora. This pen is encrusted with more than 30 carats of diamonds on a platinum barrel.  Its topped with a large diamond and has an 18 carat gold nib.  This $1.25 million pen is so exclusive, only one is made each year.

5. La Modernista Pen was created by Caran d'Ache in 1999 to celebrate an architect who died in 1926.  The 6 sided pen is composed of a rhodium coated solid silver body, encrusted with 5072 Wesselton diamonds and 96 rubies.  This pen also has an 18 carat gold nib and goes for only $265,000.

7. The Limited Edition Boehme Papillion Pen by Montblanc.  This limited edition pen comes in white, yellow, or rose colored gold and encrusted with 1,400 diamonds and sapphires with the Montblanc diamond at the top.  All this can be bought for a measly $230,000 or so.

8. The MontBlanc Boehme Royal Pen features an 18 carat gold and platinum plated retractable nip. It is encrusted with more than 1,430 diamonds, the Montblanc star logo is composed of 18 diamonds and 18 carat white gold rings. This pen sells for $1.5 million.

9. The Pierre-Jouet Anniversary Edition Pen by Osmos is a bit more affordable. The pen is hand crafted in a green resin to represent the bottles with an 18 carat gold nib engraved with the bicentennial logo.  The side of the pen carries the Bicentennial logo which matches the Art Nouveau flowers on the Belle Epoque bottles.  This pen is only $134,000.

10.  The most expensive pen is the Fulgor Nocturnus pen by Tibaldi.  This pen was created based on the divine proportions of Phi.  The ratio between the cap and the visible portion of the barrel is exactly 1.618 when the pen is closed.  It is encrusted with 925 black diamonds and 123 rubies.  Only one was every made and it sold for $8 million at a charity auction.

These are the top pens but you could get by spending much less, say $4,000 to get a unique pen.  I'll stick to buying mine in July and August when everything is on sale.  Let me know what you think.
Posted by Lee MacArthur at 4:00 AM

Email ThisBlogThis!Share to TwitterShare to FacebookShare to Pinterest
Labels: Most Expensive Pens