The History of Perfume. 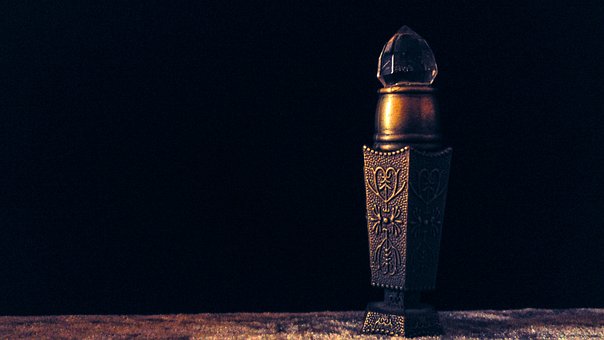 When I was growing up, I kept hearing perfumes were used to hide body odors in the past but I never wondered if it was true?  We all know things are spread around with no basis.

Egyptians are credited with the creation of perfumes which were used in everything from religious ceremonies to burial preparations to every day wear.

In addition, Egypt had its own god of perfumes, Nefertum, who wore a crown of water lilies. Water lilies was the most popular scent of the time .  They believed perfume was the sweat of the Sun God Ra. Perfume in these times was actually a scented oil.  The rich, both sexes, anointed themselves with scents such as lily to denote their status so none of the poor could afford it.

The Persians adopted this practice to show political status.  The Persians were so into perfume, their king was often pictured with perfume bottles. They dominated the perfume trade and it is suspected they perfected the distillation process which lead to the base of alcohol.

It was the Greeks and Romans who began to consistently produce perfume in large quantities for use by everyone.  Since they carefully documented their recipes, many have survived to the present.  In fact,  archeologists uncovered the remains of a perfume factory in Cyprus dating back to 2000 BC. In addition, a wall in the perfumer makers house in Pompeii shows the process used back then.

Perfume making secrets and recipes were brought back by the Crusaders, returning from the holy wars in the middle east. The first recorded alcohol based perfume was created in the 14th century for the Queen of Hungary and was known as Hungry Water. It was most likely made of distilled alcohol and herbs.

The perfume makers in Italy made a break through when they discovered Aqua Miribilis a liquid made of 95% alcohol base with a strong scent. This allowed people to have liquid perfume. This invention caused Italy and Venice in particular to become a perfume making center. It was Catherine De Medici who brought perfume to France.

This is short history of perfume.  Let me know what you think.

Posted by Lee MacArthur at 4:17 PM

Email ThisBlogThis!Share to TwitterShare to FacebookShare to Pinterest
Labels: History of Perfume.