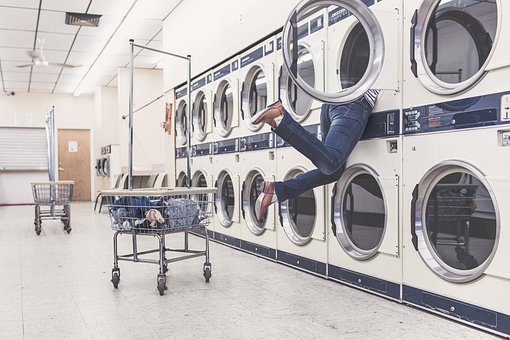 I remember when I was little, there was one old lady in the neighborhood who washed her clothing using one of those old machines.  She'd fill the machine, let it churn for a while and then squeeze the water out of the clothing using some sort of roller device on the side.  She'd then empty the water from the machine, refill it and throw the clothing back in for a rinse cycle before repeating the process. Eventually, she'd hang the laundry outside on a line.
At the beginning of the 19th century, an American filed the first patent for a washing machine that required people to pour hot water into a tank, throw clothing in and move them around, before taking them out and wringing between two rollers.  The water was then drained.

About 20 years later, the Shaker communities improved on the basic idea till they had a product they could sell to the public.  These machines were fairly large and created to perform as small commercial machines.  One of their top machines was displayed at the Centennial Exposition in Philadelphia in 1876.  Until 1908, home washing machines had to be powered by humans while commercial machines were powered either by steam and a system of belts.

What changed in 1908, thanks to Thomas Edison's discovery of electricity, was the way washing machines were powered.  In that year, Thor, the first electrically powered washing machine hit the market. The Thor was a drum type machine with a galvanized tub.  This invention changed the things forever.  Several companies jumped in selling their version of the machine.  The drum was run by electricity but much of the rest of the work was still done by humans.

It wasn't until the 1930's that someone managed to create a fully automatic machine.  One could adjust the pressure, the water temperature and the time it washed in these new machines but they had to be anchored to the floor because there was no drum suspension. In addition, the were connected to the running water using temporary slip on connectors.

By the 1920's wooden tubs had disappeared and in the 1950's, a spin free element was added.  The 1950's also brought us the automatic machines with the more modern buttons to control washing and rinsing temperatures, etc.

There was Maytag which began in 1893 to make farm implements but the owner added a wooden type of machine to his offerings in 1907.  Soon after, the owner devoted his manufacturing company to making only washing machines.  Many people grew up watching those commercials with the "Maytag Repairman" who never got called to fix the machines.

Then there was the Whirlpool corporation which began in 1911 to make electric powered motor wringer washing machines.  Just five years later, they were producing machines faster than they could make them.  They sold many of their machines through Sears.

The first computer controlled machine appeared in 1998. Now you can buy a machine with so many choices on every cycle that its easy to do a variety of fabrics.   Keep an eye on here because I'll cover the history of the dryer since we tend to buy them in pairs.