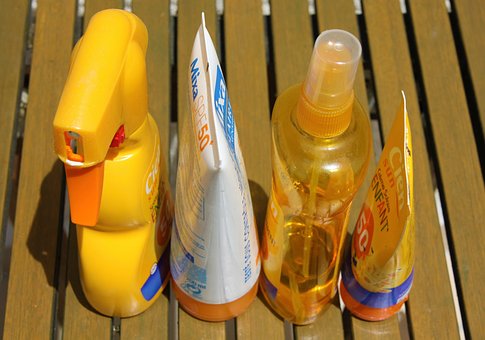 If you look at older photographs, you'll notice everyone wears hats when they go outside.  Women on wagon trains wore extremely wide brims while women in the city had thinner brims but often combined hats with parasols.

Have you ever wondered why?  They didn't have sunscreen.  In fact, sunscreen is a recent development that recently celebrated its 80th year of existence.

Back in the early 1930's, Australian Milton Blake created a sunscreen ceme in his kitchen which he sold to Hamilton Laboratories to market to the public.  At about the same time Eugene Schuller, founder of L'oreal cosmetics, created his own version of sunscreen to market but neither creme protected people from sunburn very well.

However, in 1938, a young man got sunburned while climbing a mountain on the Swiss-Austria border.  His name was Franz Greiter who was majoring in Chemistry back at his Swiss university.  As a result of the sunburn, he was motivated to invent the first sunscreen with an SPF of 2 , which was marketed as "Glacier Creme" locally but later by a company called Piz Buin after the war.

One of the first real sunscreen products in the United States was released in 1944 by Benjamin Green.  He called his "Red Vet Pet" short for Red Veterinarian Petroleum.  It was a ugly red sticky jelly similar to petroleum jelly but it was heavy and smelled.  It was used by military men who needed protection.  It worked by forming a physical barrier between the sun and the men's skin.

At the end of the war, Mr Green modified his recipe by taking the Red Vet Pet and adding cocoa butter, and coconut oil to make a better sunscreen.  This formed the basis of the first commercially released Coppertone Suntan Creme.  Even this creme was thick and it was more like wearing paint rather than the light weight lotions we are used to. About 10 years after the original release of Coppertone Sun Creme, Joyce Ballentyne drew the famous little Coppertone Girl.  She based the character on her three year old daughter.

Although Franz Greiter's Glacier Creme sold well, especially to mountaineers, he didn't disappear from the scene. In 1962, He introduced the SPF rating system we see in all sunscreen products today but the United States FDA did not adopt it until 1978.  One year prior to this, water resistant sunscreens hit the market.  In 1988, the FDA adopted the first UVA filter which joined the already approved UVB filters.  Sunscreens have continued to improve so now you can get them in spray form, easy to spread lotions, or  ones that can be used on your face so your eyes don't sting.

Just remember to use it if you are going outside, even in the winter.  I wear 50 +++ on my face every day of the year, even when its dark and there is a blizzard going on.  Let me know what you think, I'd love to hear.  Have a great day.

Email ThisBlogThis!Share to TwitterShare to FacebookShare to Pinterest
Labels: History of Sun Screen.