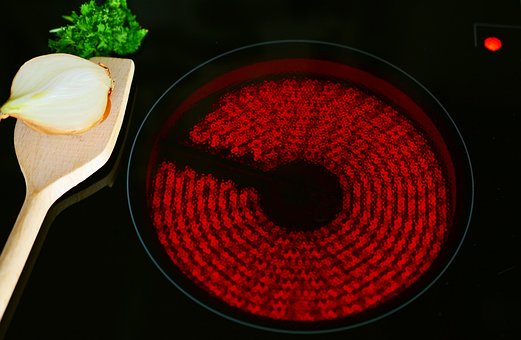 As time passed, the stove went through wood, to gas, before an inventor came up with an electric stove in 1892  in Canada but it was installed in one hotel.  Although an electric stove designed by another company appeared at the Chicago World's fair in Chicago back in 1893, the first United States patent wasn't issued until 1896 by a third person.

It appears these early "electrical stoves" sold in the early 1900's were actually more like the modern hot plates and were often referred to as "disk" electric stoves.  Automatic controls were added to stoves in 1915 and by the 1920's were integrated with the stove.  During this same period, the stove transitioned from a hot plate to the more modern look

During the first 20 years of the 20th century, the number of electric stoves increased as they became better and their popularity increased during the 1920's because they were  easier to clean, cheaper, and cooked food faster.  In addition, stoves and ranges were sold together as a unit from the beginning.

Many people at the time complained that these stoves cooked food so fast that the art of cooking was being sacrificed for a bit of money and time. These early models used circular coils heated by an electric current.  Unfortunately only cities really were wired for electricity so most of the early stoves were installed in urban areas.

It wasn't until the government began to string electrical wires across rural areas in the 1930's and 1940's that electric stoves became available to more people.  Furthermore, once World War II ended, people began buying more and more electric stoves because the advertising campaigns promised to make a woman's life so much easier.

An add from 1948 advertises an electric stove with push buttons and a double oven but the basic set up of heating didn't change until the 1970's when companies began introducing glass ceramic burners.  The most recent change is the induction coil which uses electromagnetic induction so burners do not heat up as they have in the past.

I'll look at the history of stoves and gas stoves later on. Let me know what you think, I'd love to hear. Have a great day.
Posted by Lee MacArthur at 4:00 AM

Email ThisBlogThis!Share to TwitterShare to FacebookShare to Pinterest
Labels: History of Electric Stoves.