The History of Hair Dryers 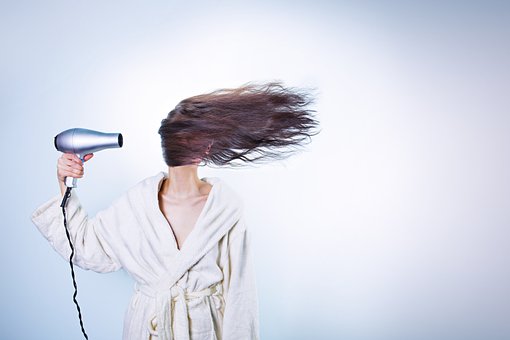 I did make it home yesterday even though I wasn't sure I would't.  The village weathered a nasty windstorm but by late afternoon, things calmed down enough to get a flight to land.  I lucked out to be a passenger on the only airplane trip out the whole day.  The good news is that I made it home but they forgot to load the luggage on the plane so I didn't have any of my clothing or anything else.

Now for the topic of the day.  Hair dryers and blow dryers.  The thing that many women need and almost all hotel rooms have them.

The first machine resembling a hair dryer appeared in 1888 in the salon of French hair dresser, Alexandre Ferdinand Godefroy.  He called it the "hair dressing device" and it looked like a vacuum cleaner because it was a long tube connected to a heat source. There device had a valve to release the steam produced during the drying process, otherwise the hair might have cooked.  The device was designed to speed up the process of fixing extremely long hair into loopy, curly, updos but it  didn't circulate air very well so it didn't save any time.  The machine itself was extremely clumsy so it didn't take off.

Unfortunately, nothing happened in the development of hair dryers until the first hand held units appeared in the 1920's just as shorter hairstyles became popular.  The first hand held units were grey metallic gun like models that helped flappers get the fluffy hair we are used to.  Up till this point, hair was dirty and stringy more often than not.

The problem with the first models of hand held dryers is that their metal casings were hard to use, they only drew 100 watts of power, and took a lot longer to dry hair so a woman's arms could get tired holding them.  Some of the early machines came with pedestals to hold up arms so women didn't get as tired holding the hair dryers.

Even with this, they were considered modern marvels.  At about the same time, new hooded models became available in salons but these evenly heated the hair and became quite popular in the 1930's.  These machines were made of metal so they looked like tall metal helmets with long metal pipes leading to the heat source.

During the war, women joined the workforce and didn't spend as much time fixing hair but once the war ended, women had time.  So salons began advertising themselves as the place for women to spend their leisure time.  They showed women reading magazines while sitting under dryers.

In an effect to bring the salon into the home, the first bonnet hairdryer arrived in stores in 1951.  It had a shower cap like headpiece connected to the motor via a hose and was a whole 300 watts of power.  By the 1960's these bonnet type hair dryers advertised they could dry hair in just 22 minutes because it used 500 watts of power.  The 1960's also caused hair dryers to be made out of plastic instead of metal making them lighter and more portable.

During the 1970's safety regulations were finally put in place but prior to this, all hair dryers had been unregulated and often shocked people with electrical current.  They came with automatic off switches and would no longer electrocute people if dropped into water.

Now blow dryers are quite common, cheap, and so much safer than in the past.  Let me know what you think, I'd love to hear.  Have a great day.