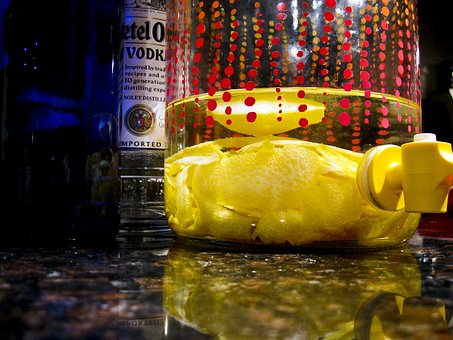 Every time I read a book or watch a movie that takes place in Italy, everyone seems to want to enjoy a drink called Limoncello.  Limoncello is an Italian liquor made out of lemon zest, sugar, water, and alcohol.  The lemons are not just any lemon but a lemon grown in certain areas because the fruit has an intenseness and slight sweetness not found in most varieties.

Although there are many stories concerning its origin, tt is said that this drink began in a farmhouse owned by Lady Maria Antonia Farace.  She'd make this drink out of the fruit she grew to share with visitors.  After World War II ended, her grandson opened a bar and offered Limoncello made according to his grandmothers secret recipe.  His son is the one who registered the trademark in 1988 and began a business producing it before shipping it all over the world.

The thing is that every region has its own story of how the drink originated from monks who used it as part of their daily meditations, to the drink has been around since the beginning of the domestic cultivation of the lemon tree, to being used by fishermen to ward off colds and stay warm.

What is common is that the lemons are picked by hand so they do not touch the ground, and are harvested during the warmer months between February and October. In general, the drink is made by steeping lemon zest (peels) in alcohol like vodka until the oil is freed and the liquid is a beautiful yellow.  For the most part, the liquid is between 25 and 30 percent alcohol and its produced in Southern Italy.

The drink is usually consumed before the meal or after the meal because it is said to aid digestion.  It is generally served chilled but not over ice to improve its flavor.  Limoncello is served in shot glasses or small cups because it is meant to be sipped slowly.  In addition to drinking it straight, it can be mixed with citrus juices, fruits, other alcohols and flavored with mint or basil as cocktails.  It is preferred in cocktails because it does not have the sharp flavor that comes with lemon juice.  Furthermore, it is also used in cakes, cheesecake, or other baked goods. This drink also comes in pistachio, melon, or strawberry flavors.

It is possible to make your own limoncello but it takes a bit and it might not taste the same as the commercial varieties.  Take the zest off of 10 lemons.  Make sure you get only the zest and not the bitter white part.  Put the zest in a jar and cover with one bottle of high quality 100 proof vodka.  Cover and place in a dark area for four weeks without touching it.  At the end of four weeks, strain the peels out of the liquid.  Add one cup of simple syrup to the liquid and place in a bottle.  Place it in a dark area again for two more weeks.  It should be ready to drink at this point.  Chill in the freezer before you serve.

I've never had it but one of these days I am going to try it but I know my brother acquired a taste for it when he and his family visited Italy.  When they came back, they gave a bottle of it to my parents but I never got around to trying it yet.  Let me know what you think, I'd love to hear.  Have a great day.
Posted by Lee MacArthur at 4:00 AM

Email ThisBlogThis!Share to TwitterShare to FacebookShare to Pinterest
Labels: Limoncello