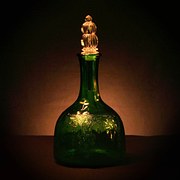 Yesterday, I looked at vinegar in general and today I'm taking a closer look at Balsamic vinegar because it is fascinating due to having several different grades, much like olive oil.  It can range in price from $3.00 for a 16 ounce bottle to $200 for a bottle of premier vinegar.

As stated yesterday, balsamic vinegar is made in Italy from grapes.  The preparation of the grapes determines its quality.

At the top, is the traditional balsamic vinegar is only made in one or two places in Italy and is made from crushed grapes including the skins, juice, seeds, and stems.  This mixture is cooked until it has been reduced by half before it is left to ferment for up to three weeks.  At this point, it is further concentrated over a span of 12 years as it moved through a series of barrels made of different woods.

Once a year the contents from the smallest cask are bottled.  The remaining vinegar is moved to the next smaller sized barrel while the largest is filled with fresh liquid. This type of vinegar is labeled as Aceto Balsamico Tradizionale and carries a D.O.P. ("Denominazione di Origine Protetta") stamp.  The stamp is the European Unions assurance this has been made to strict regulations.

The next level down is the Condimento Balsamic.  This vinegar has been made using traditional methods but has not met the strict regulations required for traditional vinegar.  The vinegar in this category may not have been aged 12 years or it might not be made in the two cities designated to make traditional balsamic vinegar.  Unfortunately the condimento term can also be used on lower quality vinegar because it is not a protected designation.

Next is the Balsamic vinegar of Modena I.G.P.  The first balsamic vinegar imported into the United States came from Modena but as it became more popular the demand out stripped the supply and all sorts of balsamic vinegar was imported.  In 2009, the Equropean Union created the I.G.P. designation which guarantees that only certain grapes are used in the making of this particular vinegar.  In addition, the grapes can be from anywhere but they must be processed in Modena, Italy.

This vinegar is not fermented but is cooked in pressurized vats and aged a minimum of 2 months in wooden vats.  The acidity level of 6% is created by adding wine vinegar to it.  The last grade is imitation balsamic vinegar which is often made of colored and sweetened vinegar. The vinegar used might be wine, white, or apple cider vinegar that is processed so it resembles balsamic vinegar.

The easiest way to tell what you have is by reading the ingredients list.  If it is the best, it will list grape must, if its medium, it will have grape must and wine vinegar, if its the lowest, it will not list the grape must.

So next time you go shopping you know what you are buying.  Just know the better quality it is, the more you'll pay for it.
Posted by Lee MacArthur at 4:00 AM

Email ThisBlogThis!Share to TwitterShare to FacebookShare to Pinterest
Labels: Balsamic