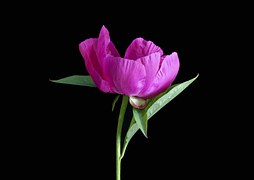 When I was a little girl, I would watch reruns of "Bewitched".  I loved the way the woman would twitch her nose to make things happen.  It was fun watching her say a few words and someone would disappear.  I wanted that power to send my sister off to the park when she irritated me.

When I got older, I realized it was all created for television and totally fake.  It was fun watching televised specials with magicians who do those ingredible tricks.  The ones where they made a jet disappear or a building appear.

Recently, I've come to realize we have a world filled with magic.  Its not the hand waving type or the huge televised things, its the small naturally occuring ones.  Think about this:

At the end of winter, was the snow melts, we see small grape hyacinth peek up through the small holes and begin blooming.  A beautiful purple against the glaring white of the snow.  To me, its a magical moment because its still cold out.  Or what about the tree's when they bud because its warming up and the sap is flowing.

Every winter, many places get cold enough, plants go dormant till spring.  It is so mind blowing in the spring to see the plants wake up and color unfold replacing the white with a cornucopia of color.  Then in late summer, early fall, many of these same plants have fruit and vegetables which ripen.  Have you had a fresh tomato or an apple, straight from the plant while its still warm having been kissed by the sun?

My mouth is drooling thinking about that.  The fragrance just wraps itself around your senses whisking you to somewhere else.  I have a friend who when she visits family in Arizona, she goes out to pick a fresh peach.  She described the magic of one and how it is so different from what is found at the grocery store.  As she spoke, her eyes were closed while she licked her lips in anticipation.

Have you ever picked an ear of corn straight off the stalk?  Its so juicy you could almost enjoy it without cooking.  A child I know, picked the families first ear of corn and ate it before anyone knew it was ready.

What about those moments where you see a wild animal who pauses to stare directly at you, possibly taking time to wink before sauntering off.  I visited a friend one time and we stood with cups of tea in our hands while we watched a doe and her two off spring wander through the yard.

Nature provides us with so many magical moments, proving to me that magic is alive and well in our world.

Email ThisBlogThis!Share to TwitterShare to FacebookShare to Pinterest
Labels: Magic