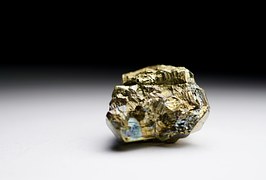 The other day when I looked for interesting facts on pizza, I noticed one of the most expensive pizza's in the world had flakes of edible gold on it.  On television, one sees ads for buying gold because its supposed to be good to use in times of trouble.

Even stories such as the one with King Midas focus on wanting gold, gold, and more gold.  The price of gold is currently around $1275 per ounce which is equivalent to one month of rent or house payment for many people.

There are all sorts of gold hunting shows on television where people go into places to find the elusive mineral.  I have friends who talk about hunting for gold but they aren't sure after seeing what it takes on those shows.

The United States used gold to back paper currency which meant you could turn the paper money in for its equivalent amount of gold but no one really did it.  The government set the price of gold but most countries quit using gold during the depression although the United States went off the gold standard in the 30's, it did not officially end it until 1971.

Now why are people so inured with gold?   Is it the color, its it its properties?  What?

Well, there are a lot of reasons.

1.  Gold is gold.  It does not require the backing of anyone else, a bank, or a government.

2.  Gold is beautiful and easy to work with.

3.  It does not rust, can go through a fire, and remains recognizable for a very long time.

4.  There are few materials which will corrode Gold.

5. It is the only metal of this color.

7. There is only one grade and one price.

8.  We want to eat it because it shows wealth.


Its worth.
1. At the time of Christ, an ounce of gold would buy a toga, a leather belt, and sandals for a Roman citizen.  Today it will buy a good suit, a leather belt and shoes.

Email ThisBlogThis!Share to TwitterShare to FacebookShare to Pinterest
Labels: Gold.