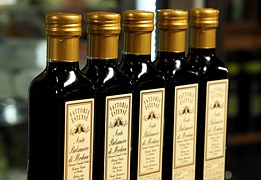 I decided to look at vinegar today because a friend just sent me a bottle of Chinese black vinegar.  No, I'm not sure what it is but I know its used in Asian cooking.

Chinese black vinegar is made out of glutenous rice and malt so its much darker than apple cider.  It is similar to a balsamic vinegar.  It comes from the Chinkiang Province and is traditionally used in Sharks Fin soup.

Since I mentioned Balsamic vinegar, I'm checking it out next because I really like it in my salad dressings.  It has a much better flavor than regular cider vinegar.  The original balsamic vinegar is made in Italy from the whole pressed grape including the skin, seeds, juice and stems, fermented and bottled.  There are more than one type so this will be covered in tomorrow's column.

I use a lot of rice wine vinegar which is made by fermenting the sugars in the rice into alcohol before  turning it into vinegar.  Compared to distilled vinegar, rice wine vinegar has a much milder and sweeter flavor.

If you are into Fish and Chips, you are aware of malt vinegar which is made from malted barley which has been brewed into an ale and allowed to turn into vinegar.

Then there is red or white wine vinegar is vinegar made out of red or white wine and is often used by the french in their cooking.  The wine is allowed to ferment until it has turned sour and bottled for use.  Sometimes it is aged so the flavor becomes better before being bottled.

There are tons of other types of vinegar but these are the main ones. Tomorrow, I'm focusing on balsamic vinegar because it is graded according to the process used to make it.  Have a good evening.

Email ThisBlogThis!Share to TwitterShare to FacebookShare to Pinterest
Labels: Vinegar