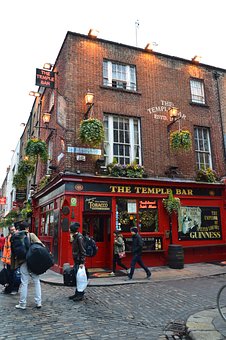 The last time I flew to Scotland, I stopped in Dublin for 24 hours to break up a very long trip and to visit a place I'd never been to.  The flight had me in the air, all night before arriving bright and early in the morning.

After going through customs, I ended up in front of the airport.  As I said yesterday, Dublin has a great bus system with luggage racks so I was able to take it to my hotel.  I was blessed because they allowed me to check in.

After checking in, I caught a quick nap before heading out to visit the town.  I'm strange in that I like to wander and explore using a map to give me a general feel.

I found the pub Jonathan Swift is said to have frequented.  It was not terribly exciting because the area right around it, stunk of urine.  I didn't stick around very long.

Not to far from the pub, I discovered the remains of medieval Dublin.  At the time, the town was under one square mile so it was rather small. There isn't much left except for a church or two, castle and a few outlines in the ground.  I had a blast walking around and checking things out.

My trip took me by some rather interesting places as I strolled in and around the medieval sections into the more modern areas surrounding it.  In and out, here and there, just having fun.  I also stop and take pictures of any flowers I see planted by the side.  I share the photos with my mother because she loves flowers.

Along the way, I found Trinity College.  Nothing much looked like it was happening because I think I visited between terms.  It was all gated off but cool.  Unfortunately,  I didn't get a chance to check out the campus itself or the Book of Kells display due to a significant lack of time.  At that point, I was looking for a music shop with Gaelic language Celtic music.  I so wanted some but I could not any at all.

Of course, I did stop in at a couple of eating establishments to pick up lunch and dinner.  I don't remember what I ordered except for a great fresh hot cup of tea.  Anytime, I stumble across a bakery, I look for fresh made shortbread to go with the cup of tea I brew in my room.

The other thing I look for is a shop which sells sheet music.  I was unable to find on in Dublin although I really wanted to pick up some Irish folk music.  I didn't get a chance to do that till I got to Glasgow.  I like picking up sheet music for tunes I can't find in the United States.

If I'd stumbled across a brewery, I would have tried to take a tour of the facility but again, I didn't find one.  I wished I'd had more time there.  I plan to go back but the next trip to Europe I have planned is going to Finland so I want to plan a stop in Iceland on my way over.  Only way to manage a short visit to new countries.

Let me know what you think.  Have a good day.
Posted by Lee MacArthur at 4:00 AM

Email ThisBlogThis!Share to TwitterShare to FacebookShare to Pinterest
Labels: Dublin