What Makes It Fudge? 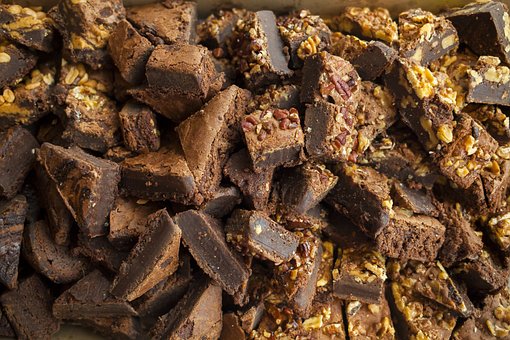 My father is a fudge connoisseur.  If he see's fudge, we have to stop and buy it so he can check out its "quality". Or at least, that's his excuse.  For the longest time, he'd make a microwave fudge at home but I think he gave up when he tried to make it during boxing matches and overcooked it a few times.

I love a straight chocolate fudge but one of my siblings prefers peanut butter fudge and another loves the marshmallow cream fudge.  I know everyone has a favorite.

Over the summer, I attended a celebration with vendors and one of them had close to 20 or 25 different types of fudge. When I was growing up, I always thought fudge was a chocolate candy but then I saw the fudge sauce for ice cream sundaes. So what makes fudge a fudge?  We know its not always chocolate, but might be fruit flavored or any of a variety of flavors.  Its the cooling of this confection which makes it a fudge.

You want crystals but you want them small and barely there so the candy does not become grainy.  The idea is that you heat the mixture to the soft ball stage around 234 degrees first.  The minute you start stirring the mixture is when the crystals begin forming so it is normal to allow the mixture to cool to about 110 degrees before starting to stir. Continue stirring until the mixture is thick with lots of small crystals.  If the crystal formation begins too early or they become too large, the texture of the fudge is no longer that nice smooth candy we love.

If you do a search for recipes, you'll find ones like Creamy Orange Fudge, Irish Creme Truffle,  Peanut Butter Fudge, Candy Cane Fudge, Pumpkin or Cookies and Creme Fudge but what do they all have in common?  The basic recipe of milk, sugar, butter or condensed milk with the appropriate flavoring.

What is your favorite type of fudge.  Let me know.
Posted by Lee MacArthur at 12:41 PM

Email ThisBlogThis!Share to TwitterShare to FacebookShare to Pinterest
Labels: Fudge