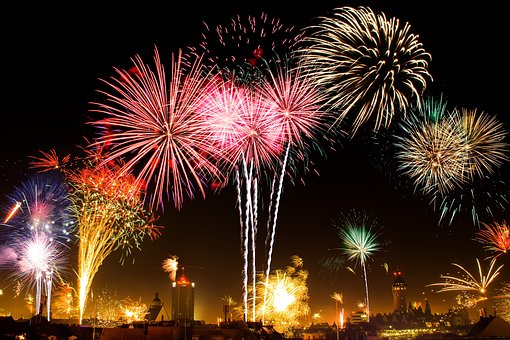 Yesterday, I shared information on a few of the more traditional beliefs at New Years.  Today, I'm looking at some of the weirder traditions.  As stated yesterday, my mother eats black eyed peas but I didn't tell you about the family tradition of having a piece of pickled herring in your mouth at midnight exactly.

She said it was a German tradition but I don't know because the family has been over in the states for several generations.  So on to some unique traditions used to celebrate the changing of the year.

1.  In Denmark they save all their old or unused dishes and plates to break on December 31st when they shatter them against doors of families and friends. The more smashed china on your porch, the more popular you are considered.

2. In Ecuador, they guarantee good fortune by burning paper filled scarecrows at midnight along with old photographs.  This is a family activity where they build the scarecrows together in preparation for the evening celebrations.

3. In Spain, it is the tradition to inhale 12 green grapes over the first 12 seconds of the new year. If you do not, you may have bad luck during the next year.  The 12 grapes represent the 12 months of the year.  Rumor has it, that wine makers created this tradition to increase the number of grapes eaten in the winter.

4. In the Philippines, they believe a person should have round items such as fruits or clothing because round means cash which is wealth.

5. In many South American countries, it is the habit to wear a specifically colored underwear to provide luck for the coming year.  Red underwear means you'll find love while gold means wealth, and white is for peace.

6. In Japan, they ring every bell 108 times because it brings cleanliness for the coming year.  In addition, if you smile into the next year, it brings good luck.

7. In a small Peruvian village, people engage in fist fights to settle their issues so when the new year begins, they have a clean slate and can be friends again.

8. In Bolivia, they bake coins in the cake.  Who ever gets the coins are believed to have good luck in the upcoming year.

9. In Columbia, they carry a suitcase with them all day in the hopes they will have a travel filled year.

10.  In Denmark, people jump from the top of chairs to jump in the New Year.  This supposedly brings good luck to them in the new year.

11. In Chile, families spend the night of New Years Eve in the cemetery next to their deceased relatives.

12. In Ireland, they take bread and hit the walls of a house with it to rid the house  of evil spirits.

13. In Finland, they pour liquid metal into water and interpret the resulting shapes to tell what the future year will bring.

14. In Scotland, the first person who crosses the thresh hold brings a gift with them.

15. In Estonia, they eat seven times on New Years day to bring abundance to themselves.

I checked into the herring and in Germany, Poland, and Scandinavia, it is believed one should eat a piece of herring at the stroke of midnight to bring a year of bounty.  So my mother was correct and she still does it even though she's quite old.  She's just added the black eyed peas to the mix.

Let me know what you think.  I"d love to hear.
Posted by Lee MacArthur at 4:00 AM