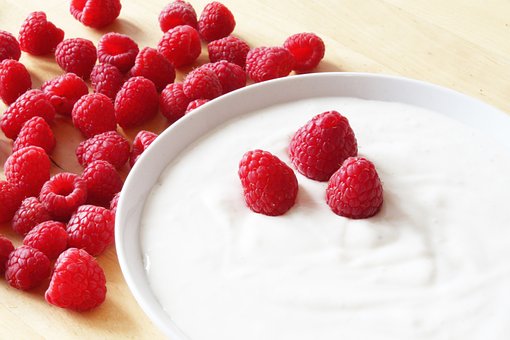 I love yogurt, especially when its homemade but I don't always have time to make it. That is until I discovered a type that is easy to make, fits in with my schedule so I can have fresh yogurt every day.

There are two types of yogurt.  The first one is the one we are most familiar with.  Its classified as thermophilic which requires a certain amount of heat to set.

The usual way for this yogurt is to get a variety of yogurt with live cultures, heat the milk, add the starter, put in jars and heat over night until they set.  The other choice on this type of yogurt is to buy a dried starter that is added to the heated milk.  You can get Bulgarian, or Greek, or other variety, each of which produces a specific flavor.

Unfortunately, most of the store bought yogurts use bacteria which lasts only one or two generations but eventually looses its power to regenerate. For the most part the bacteria has been  selected to create a specific type of yogurt so it doesn't have the same staying power as the older types of yogurt.

On the other hand, if you buy a heirloom variety, you can keep using one batch to start the next batch again and again without having to buy a new starter, every two to six generations.  Heirloom varieties can be either thermophilic or mesophilic

Mesophilic is a type which sets at room temperature.  This means you just add the starter to milk, let it sit out for a few hours and it sets.  I've been using this type for the past two months and really enjoying it. The variety of yogurt I use is from Scandinavia.

I got my starter from a company on Amazon.  The directions said I should not use boxed (ultra pasteurized) milk but living out in the middle of nowhere, that is the only type of milk I have access to other than the evaporated canned milk.  Both work so I get more of a yogurt drink which I enjoy having with my dinner every day.  It does not work as well with powdered milk.  I think it goes through the milk faster so I have to put it in the fridge much sooner.

When my starter arrived, I chose a packet, stirred it into about 1.5 cups of milk, covered it with a towel and let it set overnight till I had a thick mixture.  I threw it in the fridge for a day or two and then had it.  I love it as its not really acidic.  The variety I selected seems to have a sweetish taste to it.

I grab a cup at dinner time, leave a bit, pour more milk in and cover.  By the morning, I have a nice batch and it seems to be reproducing as well as it did on the first day. This batch is several weeks old and going strong.

Its consistency is much like the yogurt I had in Iceland and Finland at breakfast in the hotels. Since its not extremely thick, I can drink it, use it on my serial, add it to any recipe which calls for yogurt such as bread or cakes and it works wonderfully.  I'm now a believer in this type of yogurt.

I'd tell you the exact type but I just grabbed a packet and used it before I could figure out which one of the four varieties in the box.  I plan to take some with me this Christmas holidays so I can try it with the milk in gallon containers.

This type does work with soy milk but I don't like the flavor it produces.  I tried it with Almond milk but again it doesn't work.  Next thing on my list is to try the yogurt starter for nondairy milks to see what type of product that produces.  I might try starting some in a day or two.

Email ThisBlogThis!Share to TwitterShare to FacebookShare to Pinterest
Labels: yogurt.