Odds and Ends of Eye Charts and glasses. 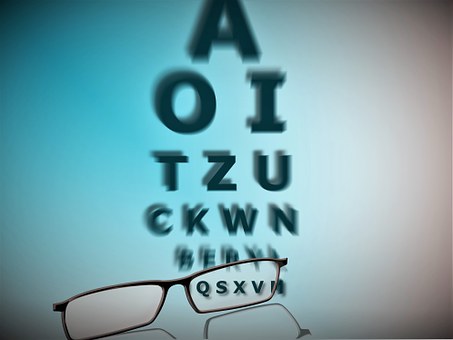 Since I don't bother with cable, I spend my money on DVD's or streaming videos so I don't have to suffer through commercials.

I buy the ones I know I will watch again and again such as Call The Midwife.  I adore Sister Monica Jones with her outbursts of wisdom rooted in the classics but it was a conversation between Jenny and one of her boyfriends that prompted this column.

The scene took place between Jenny and her boyfriend one evening when they sat outside, identifying various stars and star clusters such as Orions Belt.  Toward the end of the conversation he commented that she'd passed the eye test for the Roman Army. Of course when writings throw tidbits in like that, I'm interested in finding out if its a real fact or a figment of some writers imagination.

In this case, its fairly accurate.  If you wished to join the Roman Army, they asked you to identify the stars in the tail of the Big Dipper. if you could, you became an archer, if not, you'd end up in a different position such as cook.

The first recorded eye test -The Arab Test- required people to distinguish Mizar and Alcor in the handle of the Big Dipper. This was man's first attempt to standardize vision.  Not much happened until after the invention of the printing press when local print shops would print up some sort of eye chart based on the fonts available.

This meant, most ophthalmologists and optometrists used what ever chart they preferred so there was no standardization between them.  This made it rather difficult for people because the eye wear produced was not as consistent as desired.

Although glasses had been around since the 1300's, it wasn't until much later that doctors realized everyone required different things for glasses.  In the 1700's you had to determine whether you were near sighted or far sighted and then choose the correct lenses for yourself.  Most sales people assumed everyone's eyesight changed at the same rate so if you were 40 years old, you'd be steered towards the lenses appropriate for that age.

The next major invention towards what we know today as the eye chart occurred in 1862 when Herman Snellen invented the standardized eye chart. His chart differed in that he used specific letters created using minutes of an arc instead of the more common typographic measuring system.

He is responsible for having "20/20" eye sight which doctors use today.  He is also invented the floating E chart for children and nonreaders.  All a person has to do is use the hand to show the direction the letter E is facing.  In 1863, the British Army placed a huge order, becoming the first ones to use this new chart with great regularity.

This jump meant people could go from eye doctor to eye doctor and be absolutely certain their prescription was consistent and the eye glasses worked properly.  By this point, it was easier to make glasses to a more individualized prescription.

The last major change to eye charts came in 1976 when two doctors from Australia proposed a change to the Snellen chart and it is an example of the LogMAR test which became the standard for eye charts in 1984.

The have been others along the way but these are the major ones.  I hope you enjoyed this quick look at history.  let me know what you think, I'd love to hear.