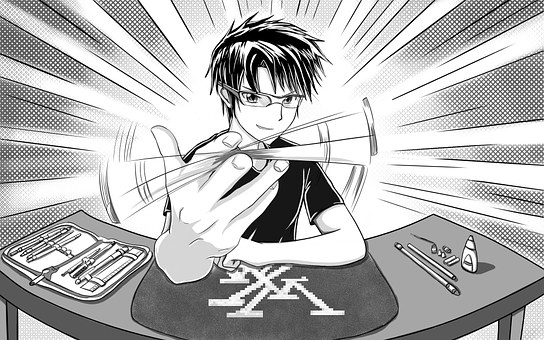 Japanese animation has become all the rage.  With this has come the explosion of Manga.  At one time, it could only be found at specialty shops but now its available at regular books stores, libraries, and Amazon.

In addition to being the usual books we are used to seeing, you can even find manga books on technical topics such as the Manga guide to data bases or microprocessors.

The term Manga refers to any type of cartoons, comics or animation.  It is made of of two different Kanji symbols, Man referring to whimsical or  impromptu while ga means picture.  It is only outside of Japan that Manga is used to describe comics while anime covers cartoons or animated forms of manga.

Where did manga come from.  What made it explode in popularity?  It is believed the first manga appeared in scrolls back in the 12th and 13th centuries featuring frogs and rabbits.  Manga artists used the same technique as used by early artists to make these animals appear as if they were running.

The term was first used in 1798 with a picture book Shiji no Yukikai or Four Seasons.  In 1814, the term appeared in the title of a book by Aikawa Mina's books.  Manga appeared over time but it wasn't until Japan found itself occupied by the United States that it began its explosion.

Americans provided comics such as Mickey Mouse, Betty Boop, and Bambi which made a great impression on Japanese artists.  They started publishing their own comics in newspapers and magazines which evolved into weekly and monthly comic books featuring 10 to 20 series installments per edition.

Between 1950 and 1969, manga evolved into two main types, one aimed at boys while the other was aimed at girls but the boys style was subdivided into that for boys 18 and under,  young men in the 18 to 30 age group, and those over 30 or adult males.  It wasn't until 1969 that female manga artists started really making a splash in the field.

Currently, Japanese Manga is breaking publish records with its series running from two to twenty volumes.  It is extremely popular and is read by people of all ages.  The interesting thing about most of the traditional manga books translated into English is they are read in the reverse order from back to front just like regular Japanese books.

Let me know what you think.  Have a wonderful day.
Posted by Lee MacArthur at 4:00 AM

Email ThisBlogThis!Share to TwitterShare to FacebookShare to Pinterest
Labels: Short History of Manga.