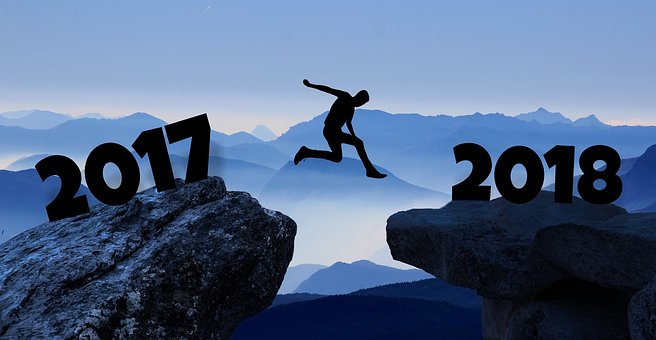 I've often wondered how the tradition of making New Year's resolutions have come about.  Its just something I've done all my life because my parents did it and encouraged me to do it.  Of course, I didn't get good at keeping my resolutions until I got out of the house and gained some self discipline.

The tradition of making resolutions has been a round for a very long time, since the Babylonians.  Their New Year was in mid march when they had a 12 day long celebration during which time they recognized the rebirth of the natural world by planting crops, crown an new king or reaffirm the power of the current king, make promises to their god, and pay back debts. They are said to be the first ones to celebrate the new year and make resolutions.

Julius Caesar moved the new year to January 1st in 46 B.C. because the month of January held special significance having been named after their god Janus.  They believed he looked back into the past year and into the future of the new year.  They made promises for the new year in the hopes he would look favorably at them. In order to accomplish this, he let the previous year go for 455 days.

During the middle ages, it was common for knights to renew their vows of Chivalry and to commit to another year of service.  For early Christians, the new year became a time to think about past mistakes and behavior and to resolve to do better in the new year.  In 1740, John Wesley, the founder of Methodism, began holding New Year's services filled with prayer, biblical readings, and singing of hymns held on New Year's eve or New Year's day.

It wasn't until 1813 that the phrase "New Years Resolution" appeared in a Boston newspaper by a writer who commented on people who partied through December but when January 1st came around, they made resolutions of good behavior for the future.

Current figures state although about one third of the population actually makes resolutions, only eight percent follow through on it.  So if you don't succeed in fulfilling your resolutions, don't feel bad.  We are all human.

Email ThisBlogThis!Share to TwitterShare to FacebookShare to Pinterest
Labels: History of Resolutions